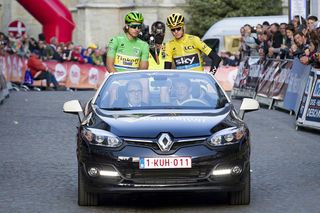 Peter Sagan and Chris Froome get a lap in the pace car in Natourcriterium Aalst (Image credit: Getty Images Sport)

After the Tour de France, the stars of the race including the overall winner typically celebrate in front of an adoring public at several lucrative post-Tour criteriums in Belgium, France, the Netherlands and other countries. However the Tour de France is facing ever-shifting dates for postponement because of the coronavirus pandemic and the post-Tour criteriums, by definition, are also on uncertain ground.

Organisers of the Criterium Aalst in Belgium, scheduled to take place two days after the finish of the Tour de France, announced they are cancelling their 85th running of the popular event that typically attracts the maillot jaune for a few hot-laps around the town square.

On Monday, the French President Emmanuel Macron announced an extension of measures to contain the COVID-19 coronavirus pandemic that would bar public gatherings until at least mid-July. With the Tour de France now possibly on hold until August, the post-Tour criterium (Natourcriterium) organisers face difficulty knowing when to hold their events.

Tour de France could be postponed until August

"As it has been expected for a while, the Tour of France will not take place on scheduled date, hence the Napoleon Sports & Casino Natourcriterium of Aalst will not be able to continue on the scheduled date of Monday 20 July," the race announced on its Facebook page.

"Health and wellbeing are most important at the moment and we hope to make another beautiful edition next year. We also want to thank the city of Aalst, main sponsor Napoleon Sports & Casino and our other sponsors for their support from the past editions and we hope to receive you all again, hopefully in good health, again next year."

Meanwhile, organisers of the 'Daags na de Tour' in Boxmeer, the Netherlands, have stopped their preparations, the Acht van Chaam says it may need to make changes to the programme but expects the support of the municipality, and the Natourcriterium in Roeselare organisers are on hold until the Tour de France dates are decided.

Thomas Verhaeghe, chairman of the organizing committee, told Sporza: "We are awaiting further developments and the decision of ASO. If the Tour is shifted to a date later this summer, then we will look at the situation together with our sponsors to maybe still organize our criterium in Roeselare. These are bizarre times."

"We will first wait and see what the National Security Council will proclaim tomorrow. Only then can we start to see if we can continue our post-Tour derny criterium. Wait and see," said organizer Joost Van der Vliet, according to Sporza.