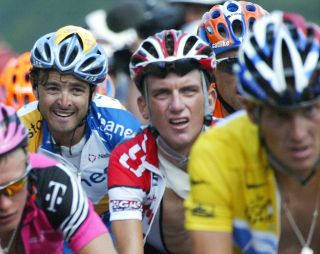 Lance Armstrong's former US Postal Service teammate Tyler Hamilton has cast doubt on whether Armstrong will fulfil his promise to tell his "truth", suggesting to the Off the Ball podcast that Armstrong is still keeping secrets despite promising to tell "his truth" in the two-part ESPN 30 for 30 documentary LANCE.

Reacting after watching part 1 of the show, Hamilton suggested that only half-truths have come out not only from Lance Armstrong but from many riders of his generation.

Hamilton rode alongside Armstrong as a teammate from 1998 until he changed teams in 2002 and became a Grand Tour rival. After being banned and losing his 2004 Olympic Games gold medal for blood doping, Hamilton made a comeback while in the shadows of Operacion Puerto, and then given an eight-year ban for a second doping positive.

Later, he wrote a tell-all book with co-author Daniel Coyle: The Secret Race: Inside the Hidden World of the Tour de France: Doping, Cover-ups, and Winning at All Costs.

He is hoping to see more information coming from Armstrong during part 2 of the ESPN documentary.

"I'd love to see more of the truth. The whats, the whys, the how - all that. Not anything against Lance but for the future of cycling, for the younger generations of the sport. I don't think we've seen enough of the past from him or from a lot of individuals.

"There are so many friggin' half-truths out there - like 'I doped from here to here then stopped' - There's a lot of that.

"Not coming forward with some of these secrets that can make a big difference. Because those secrets haven't come out [it's a cycle] - we need more of the details. Not only from Lance but from a lot of these individuals.

Hamilton admits that while there were plenty of other teams who doped, the riders from US Postal justifiably had to speak for the entire generation of riders.

"We have to make sure that we haven't gone through all this bullshit for nothing," he said.

"They are catching some people once in a while, which I don't like to see but I feel like it is getting better, but it could be a lot better of we knew some of the truths from the past.

"Maybe we could get rid of some of these people who are not good for the sport of cycling, that are still involved in the sport today."

Part 1 of LANCE aired on Monday, May 25 and is still available on the ESPN Player. Part 2 will air on June 1 and be on the player at that time.

ESPN Player is available in Europe, Asia and Africa with a monthly pass. The price comes to £9.99 ($12.16), giving you access to ESPN films, coverage of college sports around the USA, the X Games, and much more besides. An annual pass will set you back £69.99 ($85.21). A week-long free trial on offer with both packages, and you can opt-out of both at any time.