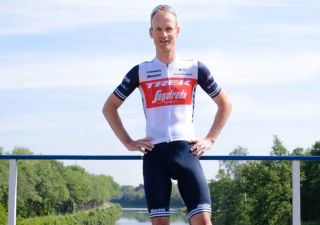 Trek-Segafredo have confirmed the signing of Pieter Weening for the remainder of the 2020 season, with the 39-year-old Dutchman set to provide support and expertise, particularly in stage races during the intense, rescheduled race calendar between July and November.

Weening has won stages at the Tour de France and Giro d'Italia but was unable to find a team for 2020 after the Roompot-Charles stopped following the 2019 season. He rode for long spells at Rabobank and Orica-GreenEdge, wearing the pink jersey at the 2011 Giro d'Italia for four days after winning in Orvieto.

"We first got in touch with Pieter back in February. Knowing that after his crash, Matteo Moschetti would be out for an extended period, we needed an experienced rider who would be able to fit in the group and be ready to race immediately. Pieter is known to be a super professional rider, and we were convinced he would be able to meet our expectations," Trek-Segafredo team Manager Luca Guercilena explained.

"The Covid-19 pandemic slowed down the recruitment process but, despite these turbulent times for cycling, we were determined to keep our word and welcome Pieter as part of the team."

A professional since 2004, Weening will join the likes of compatriots Bauke Mollema and Koen de Kort at Trek-Segafredo. With Dutch riders able to train during the COVID-19 lockdown, Weening is confident he can quickly be race fit.

"I still had the hope of finding a team, so I was still training as I would do in any pre-season. I wanted to stay fit, so I kept training all winter long. When Trek-Segafredo first contacted me in February, I told them I could be ready to race competitively in 4-6 weeks. I had a proposal, but the whole process was paused because of Covid-19 and the suspension of the racing calendar," Weening said.

"After talks with Luca (Guercilena), I had no doubts the team would keep their word if the racing resumed. In a time when many teams are struggling, it’s quite special that Trek-Segafredo is willing to recruit a new rider. I’m very thankful for that. This is a great opportunity for me to show what I can actually do, and I’m super motivated to help the team leaders achieve good results, no matter which races I’m selected for.

"I’m really happy for this opportunity and will give 150% in these last months of the year to fully help Trek-Segafredo. Hopefully, I can contribute to achieving great results for the team once the racing re-starts. I know I’m still competitive at a WorldTour level, and my motivation is super high. This will be a new team, new guys, new atmosphere, but I’m looking forward to this challenge and returning to competition."

Trek-Segafredo are currently finalizing their race programmes, with Nibali due to target the Giro d'Italia in October while Mollema and Porte lead the team at the Tour de France in September.