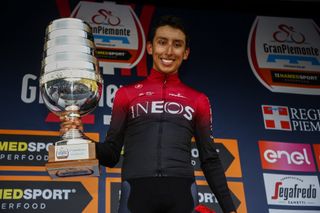 Bernal is the first cyclist to win a Laureus since Lance Armstrong won the Comeback award in 2000 and the Sportsman of the Year in 2003 before those awards were rescinded following his confession to doping.

Bernal issued a video statement on social media it was a pleasure to be nominated and be a winner of the Laureus award, saying: "It's a really big result for my career. I'm really happy. It is something that I will not forget. I'm really happy for that and hope to win again in the future."

The third-youngest Tour de France winner and the youngest of the modern era, Bernal won the 2019 Tour de France in his second attempt, having finished 15th while working for winner Geraint Thomas in 2018.

Now 23, Bernal is expected to be a co-leader in the Tour de France for Thomas and Chris Froome in July.