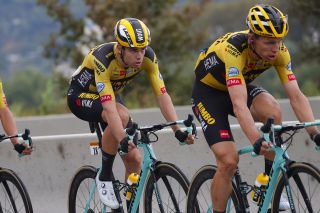 Wout van Aert admitted that he was "too scared to sprint" on roads made slippery by rain at the finish of stage 1 of the Tour de France on Saturday. Despite crashing earlier on the stage, the Belgian said that he was just happy that he and Jumbo-Visma team leaders Primož Roglič and Tom Dumoulin had made it through the stage in one piece.

A large number of riders crashed during the opening stage – most either on the first descent of the Côte de Rimiez or in a crash three kilometres before the finish on the Promenade des Anglais in Nice, where the stage was won by UAE Team Emirates' Alexander Kristoff. Philippe Gilbert fractured his kneecap and won't start stage 2 on Sunday, and neither will Lotto Soudal teammate John Degenkolb, who crashed and subsequently finished the stage outside the time limit. Bahrain McLaren's Rafael Valls is also out after fracturing his femur.

Van Aert had been widely expected to be in the hunt for the race's first yellow jersey if the first stage came down to a bunch sprint, but as the line approached, the 25-year-old explained that he decided to back off as the situation, with roads made treacherous due to the rain, had become too dangerous.

"In the end, I was too scared to sprint. That's why I didn't get involved," explained Van Aert, who finished 35th in the main, front group of around 130 riders.

"Fortunately, Tom and Primož stayed out of trouble," he said on his team's website. "We were well ahead throughout the race. Furthermore, it was really crazy on some parts of the course. It was very slippery and a lot of riders crashed.

"At a certain point there was some solidarity in the peloton and we took it a bit easier. Tony's move to calm the peloton was more than justified, in my view," Van Aert said of an agreement between the teams – coordinated by Jumbo-Visma teammate Tony Martin – to effectively neutralise the stage from the second descent of the Côte de Rimiez until there were 25km to go because of the conditions.

"I also fell myself, at 40kph," Van Aert said, according to Sporza. "I knew I shouldn't brake, but at some point you have to, and down I went. Fortunately, there were no repercussions."

Jumbo-Visma sports director Frans Maassen added: "Our leaders performed well. We were always at the front at the right moments, but I hope that the weather will get better tomorrow [Sunday]. Moreover, it will be a challenging stage.

"Fortunately, despite the crashes of Wout, Amund and George, the damage is not too bad," said Maassen, revealing that former Norwegian road race champion Amund Grøndahl Jansen – who replaced the injured Steven Kruijswijk on the squad just ahead of the Tour – and New Zealand's George Bennett had also crashed.