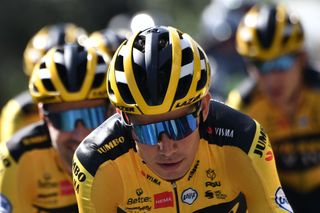 Milan-San Remo and Strade Bianche winner Wout van Aert has ruled out challenging for the green jersey and targeting stage wins at the 2020 Tour de France as he puts all his effort into Jumbo-Visma’s bid for the yellow jersey.

The Dutch team line up with Primož Roglič and Tom Dumoulin in their ranks, but Van Aert's incredible form has raised questions over whether he could mount a challenge for the green jersey and end Peter Sagan's long run of success in the competition.

However the Belgian, who won a stage in his maiden Tour last year before crashing out, ruled out taking part in the sprints as he aims to concentrate his efforts on supporting the GC bids within his team.

Wout van Aert: I'll have my own chances at the Tour de France

"It doesn't change when we talk about personal goals. We have another strong rider for flat and hilly stages and that will change how the work will be decided when Tony [Martin] is finished but it's not a goal that I go for stage wins or whatever. That for me remains the same," Van Aert said during Jumbo-Visma's pre-race press conference in Nice on Thursday.

Jumbo-Visma came into the season with their focus entirely on Tour de France glory. That remains the case but Van Aert has been in such startling form that some have raised the question as to whether he should be at the race for more than just domestique duties.

"We've worked hard to be the best possible. I've had great results in the past weeks but when we talked about roles I fully agreed. For me the only thing is that I'm fine with that. I've the same motivation for this role as when I'm trying to win a race for myself. For me it's not an issue," he said.

When asked if he was a sprinter or a climber, the Belgian described himself as somewhere in between. His recent run of form and his stage win and climbing displays at the Critérium du Dauphiné suggested that he's one, if not the, most versatile rider in the world right now.

"I'm somewhere in between," he said. I did a good Dauphiné and I did good races before. I can hang on quite a while and a proper sprinter is someone that goes for stages wins but that's also not what I'm here for."