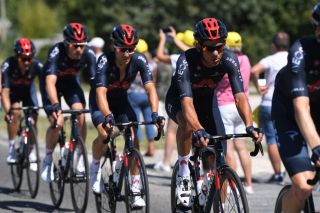 Michal Kwiatkowski confirmed that Ineos Grenadiers’ moving to the front on the toughest climb of stage 6, the 11km Col de la Lusette, was to keep a holding strategy on their positions in the peloton and, as he put, “to stay safe and out of trouble.”

Ineos Grenadiers' Jonathan Castroviejo and Kwiatkowski were rarely out of the front positions on the grinding, technically-challenging first category climb, which immediately preceded the final, unclassified ascent to the Mont Aigoual.

But rather than set things up with an attack for a stage win - as the former World Champion argued, that horse had long since bolted - the team's aim in the last hour of racing was simply to keep their team at the head of the lead group.

Van Avermaet: That was one of the strongest breaks I've ever been in

“Being on the wheels on that climb, we knew we would suffer more so we took an opportunity and we just rode on the front,” Kwiatkowski stated, “at our own speed, saving energy trying to stay safe and, I think, mission complete.”

The team knew that the climb was badly surfaced and was “pretty tricky,” the Pole pointed out, so the policy paid off. He took seventh on the stage, guiding in Egan Bernal and Richard Carapaz, who took eighth and ninth, respectively, in a group of some three dozen favourites.

Rather than aiming to keep arch-rival and stage 4 winner Primož Roglič (Jumbo-Visma) from his now-habitual strategy of sheering off the front and snaffling up some seconds in a sprint for the line, Kwiatkowski said, “We were not afraid to take it on and try for the stage win, even today. But obviously that was going to be a pretty strong breakaway if you look at the names out there."

Although keeping the break under control and at a safe distance was one thing, Kwiatkowski reasoned, for Adam Yates’ team to bring it back was another story altogether, particularly given the line-up of riders in the move.

“I directly knew it as not going to be an easy task for Mitchelton-Scott to close that down,” he said. "My money was on the breakaway today.”

Perhaps mindful of the fact that there had not been a single break on stage 5 on Wednesday which had been the subject of some criticism of the peloton, Kwiatkowski concluded, “I think people enjoyed that.”