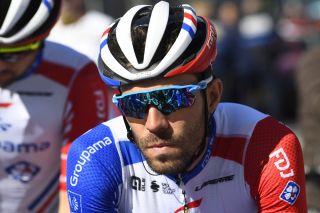 Thibaut Pinot fears 2020 could be a "lost year" in the peak of his career, but is trying not to worry about the sport or even the Tour de France, as he sees it, pales into insignificance in the wider context of the coronavirus crisis.

Speaking publicly for the first time since he placed fifth at Paris-Nice 10 days ago, the Frenchman, in an interview with France Télévisions, opened up about how his life has been affected by the Covid-19 pandemic and public lockdown in France.

Pinot lives on a farm in Mélisey in the Haute-Saône department in the east of central France, where he has a host of animals to take care of, land to go walking on, and a small lake where he can even fish for carp. His parents live less than a kilometre away but he is avoiding contact given both are still working in high-risk jobs, his mother a nurse, his father an undertaker.

"For the time being, I’m dealing with the lockdown pretty well, let’s say, given I’ve been resting since Paris-Nice," Pinot told France Télévisons.

"It’s been quite normal, I wasn’t meant to be training, so I’ve no worries there, but when it comes to starting again, that’s when it’ll get more complicated."

Dan Martin on coronavirus: Take a reality check and stay inside

With France currently on lockdown and no outings for training permitted, professional riders are having to turn to their static indoor trainers. Riders in other countries have already been clocking up significant kilometres and even racing virtually on online programmes.

Pinot, however, is not cut from the same cloth.

"I think my record on the home trainer is 1 hour 30," he said. "I don’t deal well with working out in a closed environment, especially when the weather’s nice.

"It has nothing to do with riding on the road. You lose a lot of salts and minerals, as you sweat enormously. I don’t think it’s a good thing to do too much on the home trainer."

In a bid to avoid 'mental fatigue', Pinot will limit himself to 90-minute sessions, combined with core strength work, while waiting to see how long the lockdown lasts.

When told it could well last until the start of May, he joked: "I’m going to pretend I didn’t hear that."

Pinot is due to start riding on the home trainer on Thursday and Friday, in a bid to maintain his shape should the Tour de France go ahead as planned on June 27.

"15 days off is ok. Last year, I did that after the Volta a Catalunya and, a month and a half later, I was among the best at the Dauphiné. But after a month off, that’s comparable to a winter break, and then it takes three months to get back to form. 15 days off is the maximum in order to be ready for the Tour.”

Still, Pinot will only do small rides on his home trainers and hope he's allowed out on the roads before long.

“It’ll be complicated if we start training seriously at the start of May to be ready for the start of July. You could get to 90 per cent, but at the Tour you need to be at 100.”

Pinot is currently focusing his mind on the Critérium du Dauphiné, which is now the next race on his programme, scheduled to start on May 31 but clearly shrouded in uncertainty. If the Dauphiné goes ahead, it’s likely the Tour de France will, too, but he’s well aware of the likelihood of losing out on a big opportunity to claim France’s first victory since 1985.

"I am above all worried because if the Tour is cancelled, that would mean the pandemic has worsened. I don’t know if ASO can postpone it, but it could be rescheduled or cancelled, and yes that worries me because a year without the Tour, and without a Grand Tour, is a complicated year," Pinot said.

"This year, it’s a parcours which completely suits me, I’m in my best years, I’m 30, I’m at my peak. It would be a lost year, but we don't know if all the races are going to come later in  the year."

That said, Pinot is refusing to get carried away by his concerns, and is maintaining a sense of perspective.

"Cycling, at the moment, is completely absurd. There are so many more important things than knowing if the Tour is going to be cancelled or rescheduled. For that reason I’m not complaining, and if I have to get on the home trainer for a month, I cannot complain.

"We’re in a slightly unreal situation, and cycling is nothing in the context of all that."