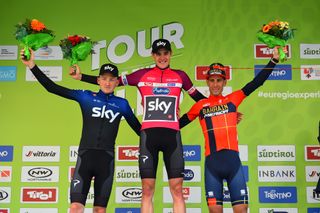 A total of eight WorldTour teams confirmed for the five-day race that climbs between Trentino, Sudtirol and Tirol in Italy and Austria between April 20-24.

Vincenzo Nibali (Trek-Segafredo), Romain Bardet (AG2R La Mondiale), Jakob Fuglsang (Astana), Rafal Majka (Bora-Hansgrohe) have also opted to use the Tour of the Alps as their preferred route to the Giro.

CCC Team, whose leader could be either Russia's Ilnur Zakarin or their new signing, 2019 Tour of the Alps stage winner Fausto Masnada, UAE Team Emirates with Valerio Conti and Under 23 Giro winner Andres Camilo Ardila, and Bahrain-McLaren complete the list.

The Tour of the Alps clashes with La Flèche Wallonne but the Giro d'Italia contenders often prefer to ride in the mountains and then head north for Liège-Bastogne-Lie1ge on the following Sunday. The Tour of the Alps has opted for short and intense stages since its evolution from the Giro del Trentino, with recent winners including Geraint Thomas (2017), Thibaut Pinot (2018) and Pavel Sivakov (2019).

Race organisers have confirmed that nine ProTeams, two Austrian Continental teams and an Italian national team will complete the start list alongside the eight WorldTour teams.

Cyclingnews will again attend the Tour of the Alps, gathering exclusive news and interviews as well full stage reports and photo galleries.