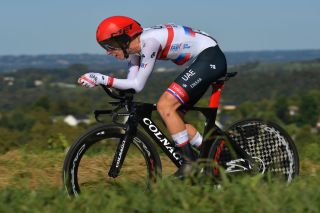 Roglic was the favourite to win the 15.7km time trial but Pogacar proved to be stronger over the 7.9km climb and the fast ride to the finish, setting a time of 31:10. Roglic was second in 31:19, with Jan Polanc (UAE Team Emirates) third with a time of 32:57.

"After second place last week coming back and taking the win felt really nice. It was a course I knew very well and we had trained a lot on it during the week," Pogacar said.

"Jan has showed his form is coming really good, too. He worked hard last week for me in the road race and to get the bronze is really nice for the team also."

Jani Brajkovič (Adria Mobil) continued his comeback at a professional level, finishing fourth with a time of 33:03.

The testing and contrasting course meant technical choices played a significant part in the results. Pogacar and Polanc opted to change bikes after the climb, while Roglic went for a one-bike strategy.

Last year Pogacar beat Matej Mohoric (Bahrain-McLaren) by 29 seconds in the absence of Roglic on a more traditional course around the Slovenian capital of Ljubljana. This year's race was held between Zgornje Gorje to Pokljuka in the north-east of the country near the border with Austria.

The race open to other nationalities, with Italy's Alessandro De Marchi (CCC Team) setting a time of  34:21 for ninth place.