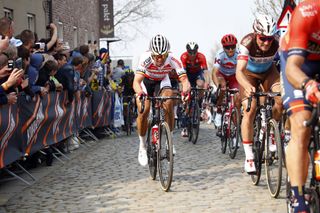 Recently retired Belgian rider Stijn Devolder – the two-time winner of the Tour of Flanders – says that he has no regrets about retiring, having realised that, at the age of 40, he was old enough to be some other pro riders' father.

"In the last few years, I've never had the feeling that I was 10-15 years older than my colleagues," Devolder told Belgian website Sporza.be in an interview at his home in Belgium this week.

"But I've now realised that I'm old enough to be some of the other riders' father – riders who weren't even born when I started to race. Then you think about it for a moment, and I realised that I was getting old, and I had a hard time with that," he said.

"I'm now at an age at which I have no regrets about stopping," Devolder admitted. "If I'd stopped five years ago, I might have thought, 'If only I'd done a few more years.' But I'm 40 now, and don't think there's anything in the sport that I've not seen yet or experienced."

Devolder – who won Flanders in 2008 and 2009, and spent his final season in 2019 with Dutch star Mathieu van der Poel's Corendon-Circus squad – revealed that he was now looking forward to working in a field that he's long held an interest in: that of agricultural machinery.

"It's been a passion I've had since I was a child, and I've always known that I wanted to work in that field after my cycling career," he explained.

"I'll mainly enjoy driving the machines, working on them, and learning as much as possible. It's an agricultural region here where I live, and so there are many opportunities.

"I've tried to follow the latest developments in farming machinery throughout my career, and am looking forward to getting started," he said.

However, Devolder won't turn his back on cycling entirely, and will continue to enjoy riding his bike.

"It'll be a different kind of cycling," Devolder said. "I won't have to think about training or the pressures of the race; I'll just enjoy cycling, if I have the time. Especially when the weather's good, as I won't have to ride in bad, windy weather. If it's looking too bad, I'll be able to just day, 'I'll go tomorrow.'"