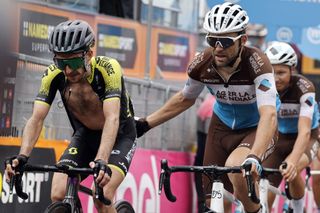 The most sought-after figure in the mixed zone in Giovinazzo ahead of stage 8 of the Giro d’Italia was neither a rider nor a manager, but a doctor. Mitchelton-Scott confirmed on Saturday morning that Simon Yates had left the Giro after testing positive for COVID-19, and team doctor Matteo Beltemacchi visited the media area to outline the sequence of events on Friday evening that led to the Briton’s withdrawal.

After finishing safely in the main peloton at the end of stage 7 in Brindisi, Yates complained of a mild headache. A routine temperature check – one of three performed each day on the Giro – gave a reading of 37.4 degrees. As a precaution, Beltemacchi ordered a rapid test for COVID-19. When that returned a positive reading, Yates underwent a PCR test, which confirmed the initial diagnosis. His Giro was over.

“The test was done just as a precaution because he never complained of any symptoms since the start of the Giro,” Beltemacchi said. “Just after the stage, he complained a little bit of a headache, and his temperature was 37.4, which is not a red flag. Maybe because it was Simon, I preferred as a precaution to do a rapid test, because thanks to RCS we can have this test that works very well. I just tried to put the rider in condition to say, 'You’re safe, don’t worry.’ By the end, the bad news was that he was positive.”

Rather than racing to Vieste on Saturday afternoon, Yates was being transported via ambulance to a location near the Michelton-Scott service course in Gavirate near Varese, where he will undergo a period of quarantine.

“Simon will go to do his quarantine near our service course. Right now, thanks again to RCS, he is being transported there in an ambulance,” said Beltemacchi.

The remainder of the Mitchelton-Scott riders and staff have all returned negative tests, though everyone within the race bubble will undergo their next battery of mandatory tests on Sunday and Monday. Unlike at the Tour de France, where teams risked exclusion if two or more riders or staff members tested positive within a seven-day window, Mitchelton-Scott’s ongoing participation in the race is not at immediate risk in the event of another positive case. Mitchelton-Scott have just five riders left on this Giro following Yates’ positive test and the abandons of Brent Bookwalter and Eduardo Affini due to injuries sustained in crashes.

“All the guys, all the staff, they were already tested yesterday, and everyone is negative. Every guy is without any symptoms. They are confident to race even if the situation is not easy,” said Beltemacchi. “Our internal bubble was, I’m pretty sure, a perfect bubble, so, actually, I’m very surprised that this could happen.”

Asked how it was possible that Yates had tested positive while the rest of this Mitchelton-Scott team returned negative results, Beltemacchi said: “Looking at how this virus works, there are people who are easily infected and others who will test negative even when their close family test positive. This virus’ ability to spread is quite unusual. I’m certain that as a team, we did our bubble in the best way possible, and I’m certain that RCS, in their effort to guarantee this bubble, have done things perfectly.”

Beltemacchi added that it was difficult to tell how Yates had contracted COVID-19 from within the Giro bubble. Like all the other participants in the race, he had returned a negative test before the start of the race in Monreale last weekend.

“It’s very hard to say because the bubble is really iron-clad,” he said. “I think that you can control everything, but not 100 per cent. We’re all tested in the bubble, but when you go into the hotels, not everyone there has been tested.”

Yates had arrived at the Giro among the principal favourites after winning Tirreno-Adriatico last month, but he lost ground at Mount Etna on Monday and showed signs of struggling on the Valico di Monte Scuro two days later. He lay 21st overall, 3:52 off the maglia rosa of João Almeida (Deceuninck-QuickStep), at the time of his abandon.

“I think the hard blow will come later,” Beltemacchi said. “Right now, he’s still realising what’s happened. He’s glad that he feels well, even though he tested positive. He’s happy that the team reacted well, and his teammates can keep racing. He’s happy above all that he hasn’t infected anyone, that everyone else tested negative.”