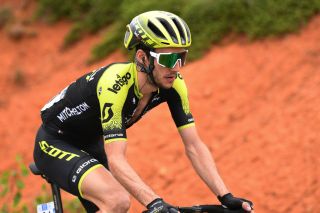 Simon Yates has extended his contract with Mitchelton-Scott, with the 2018 Vuelta a España winner deciding to remain at the team he turned professional with for a further two years.

Mitchelton-Scott announced the news on Wednesday but there was no news regarding the future of Simon's twin brother Adam Yates, who has been strongly linked with a move to Team Ineos for 2021 despite being offered a contract to stay at Mitchelton-Scott.

The Australian team's future looked unclear earlier in the year after botched talks with the Spanish-based Manuela Foundación about a possible takeover.

After severe pay cuts were made at the team and negotiations with Manuela Foundación fell apart in public, team owner Gerry Ryan stepped in and announced that he would continue to fund the team for the next two years and restore riders' pay to their original level.

That continuity and stability was key to keeping Simon Yates onboard for a further two seasons.

"The journey with the team has been great so far, I have grown and matured as a person and as a rider. We've had a lot of success and a lot of failures along the way, but I'm looking forward to continuing the journey together and looking for more success as always," Simon said as part of Mitchelton-Scott's announcement.

"The team know me as a rider, the way I work and I'm very comfortable in the environment, which goes a long way once we're on the road racing. You really need that in a team. Once we're two or three weeks into a Grand Tour it's very stressful and very tiring, not just for me, but for the whole organisation, so being comfortable with each other is very important.

"We have had a lot of success together, and I just want to continue that going forward, mainly at the Grand Tours. We won our first Grand Tour two years ago and I truly believe we can do it again, so we will keep working hard so we can take another one."

Yates will once again lead the line at the Giro d'Italia, a race he has targeted for the last two years. For Ryan, keeping Yates with the team is a significant sign of relationship between rider and team.

"We're extremely happy to have Simon continue with us into the future. It's been a relationship that has been built over a long period of time and one we believe still has great potential for even greater success in the years to come," he said.

"Simon has provided some of our organisation's proudest moments, including our first Grand Tour victory, and we're confident that together we have many more highlights to achieve."

Two years ago, Mitchelton-Scott announced that both Yates brothers had re-signed at the same time. Both riders joined the squad at the same moment in 2014 and although they have different programmes and styles of racing, the news of only Simon re-signing will only raise suspicion that Adam is set to move to Ineos next year.

Adam Yates, set to lead the Australian team at the Tour de France, has received contract offers from both teams, as Cyclingnews reported earlier this summer.

Mitchelton-Scott have already seen Daryl Impey and Edoardo Alfini leave for other teams, so the loss of Adam Yates would be a blow for the WorldTour outfit, who have nurtured his career over the last six years.