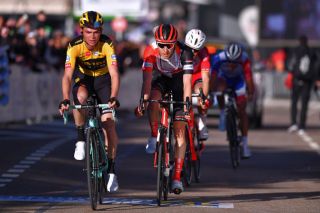 It's fair to say that even despite his stage win in last year's Vuelta a España, Sepp Kuss continues to go under the radar, but it's hard to understand why as he continues to impress whenever the road goes uphill.

That's good news for Jumbo-Visma, given that both Tom Dumoulin and Steven Kruijswijk are off the road and Primož Roglič is still to make his season debut. In fact, Kuss' performance on his first-ever appearance on Mont Ventoux on stage 3 of Tour de la Provence belied his inexperience.

But even for veteran race announcer Daniel Mangeas, Kuss, in his first race of the season, was an unknown, remaining merely a "Jumbo rider" for most of the climb even as he animated the closing kilometres in several attacks.

Kuss: I know I deserve to be in the WorldTour

For a brief moment, as Nairo Quintana rose out of the saddle to make his decisive attack, Kuss and the Colombian were alone together, moving clear on Mont Ventoux. But as Quintana moved ahead, Kuss hesitated, looked around and opted to let Arkea-Samsic's leader go.

"I felt good, but not good enough to go with Quintana," Kuss said, "but no regrets. I was waiting a little bit (for the others) but it was a pretty big effort and I definitely paid for it."

"But in the last five kilometres, I felt better — it was more like at home in the high altitude I'm used to. And I'd prefer to go down fighting and not just follow."

Now dividing time between Girona and Andorra, the former mountain biker from Durango is embracing the European scene and enjoys being "out of the comfort zone."

Perhaps it is a good thing, given how reliant Jumbo-Visma may be on Kuss — slated to ride the 2020 Tour alongside Roglič, Dumoulin and Kruijswijk — and if their sick bay remains so occupied further into the spring.

For now, Kuss is enjoying drinking in the European experience.

"For me being able to race on such an iconic climb as Ventoux is pretty unique," Kuss said. "I'm still really inexperienced but every race I walk away knowing I've made mistakes but also got something more and learned more. I'm still a work in progress."