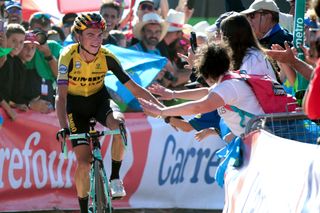 American Sepp Kuss (Jumbo-Visma) claimed the biggest win of his career after he soared away from an early breakaway on one of the Vuelta a España's toughest mountain stages and secured victory at the summit of Santuario del Acebo.

On a day which underlined Jumbo-Visma's domination of this year's Vuelta, Kuss was given the green light to go for the victory whilst teammate and overall leader Primoz Roglic handled his GC rivals' attacks.

Roglic later said that he was fine with Kuss soloing up the road, congratulating his teammate on his maiden Grand Tour stage win. He also pointed out that he was feeling strong enough to defend his overall placing, if necessary.

"I had good legs myself, so it was OK," Roglic said.

Kuss, who will celebrate his 25th birthday next week, was delighted with giving himself an early birthday present. He exchanged high-fives with fans as he came into the last 500 metres with an advantage of well over 30 seconds on closest chasers Ruben Guerreiro (Katusha) and Tao Geoghegan Hart (Team Ineos).

"I knew that the first few kilometres of the climb were the hardest so I tried to be in a good position and wanted to ride at my rhythm. No mind games," Kuss said.

"I wanted to ride within myself and have a little bit in reserve in case Primoz came across. Maybe it was a bit too early to go, but I felt good."

With four kilometres left on the final climb of the Acebo, Kuss was already away and opening up the gaps. It was a marked improvement from his performance at last year's Vuelta, where he started well but faded badly by the third week.

"At this point last year, I was completely dead. It was getting difficult to stay in the front group, I was so exhausted," said Kuss, who finished the last year's Vuelta in 65th place.

"But I learned a lot in this year's Giro, and this year in the Dauphiné, I felt a lot better."

Kuss acknowledged that his team is dominating the race, with Tony Martin doing an excellent job of leading the main peloton while he was in the break. And this despite the loss of Stephen Kruijswijk early on to injury.

"We have all the numbers when there's a selection, we're always there when we need to be," he said.

As for why he celebrated by high-fiving with the spectators on the Acebo, Kuss said, "I wanted to thank them, what makes the Vuelta so special is the passion of the fans.

"You get support on the good days, but also when you're 30 minutes down and suffering. That's what makes cycling such an incredible sport."