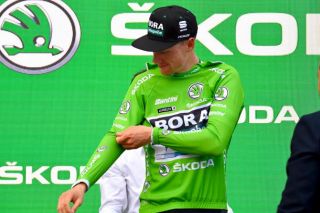 Barely a couple of minutes after losing a sprint by millimetres to Fabio Jakobsen (Deceuninck-QuickStep), Sam Bennett (Bora-Hansgrohe) stopped as he pedalled past a TV screen at the finish to confirm what he feared the result would be.

"Second," Bennett said as much to himself as a small group of journalists, in what he later revealed was one of the narrowest defeats he had suffered in his career to date.

Victorious on stage 3 by several bike lengths, 24 hours later, with a second-place finish, Bennett has gained the points jersey, but losing by so little meant it barely compensated. "This one hurts a lot," he told Cyclingnews.

The Irishman also revealed he was suffering from some underlying physical difficulties affecting his performance, to the point he said, "I have to figure it out. If I start climbing [like this] on the stages where I have to put the power down, I'm not going to survive this tour."

In terms of positioning in the sprint, Bennett said he had made some mistakes and ended up paying the price.

"I couldn't get there. I was starting to get overly aggressive, sometimes when you're forcing it, it ends up being worse and I was just forcing it.

"The flow was gone, there were too many hard accelerations, wrong side of the roundabout… the route book said it was blocked on one side and then one roundabout that was in the book wasn't there on the road. So we did the recon and it wasn't like that.

"But that was my mistake, I should have followed the other guys."

In terms of the underlying physical problem that's affecting his racing in the Vuelta - and this despite winning on stage 3 - Bennett is baffled and worried.

"I don't know what it is but something is off," he told Cyclingnews.

"I'm changing different skinsuits, shorts, bikes, TT bikes, aerobikes, there's so many variables, it's hard to pinpoint what it is."

At the BinckBank Tour, where he won three stages, "everything was perfect. And now, it's like on the climb today, I had twitches of cramp and there shouldn't be. We weren't going hard."

The alteration or difference between his being where he wants to be and where he is right now is minute, Bennett says. But it matters.

"It's a question of millimetres. In the sprint, the speed is there. But when you're doing 80 to 100 revolutions a minute for four hours a day, you feel it."

On stage 3, Bennett beat his rivals by a considerable margin, more than a couple of bike lengths, making it all the harder to comprehend from the outside that something is amiss.

"I think yesterday [Monday] what it was I felt so bad during the stage, I saved so much energy that when I went, I had power. Actually, that happens a lot."

As for stage 4, it was symptomatic of how 'on it' Bennett was in the finale, before making a mistake that cost him the stage, that he had no ideas that at the back of the bunch, several groups were caught out in crosswinds. Whilst the points jersey is a consolation prize, Bennett said, "losing this one hurts a lot. It's actually the first time I've ever lost a sprint in a lunge, or rather when it's close I always get ahead.

"There have been times when there's been a lunge and I've been half a bike off. But if it's a dead heat I've always got that."

Bennett will have a long wait before he can look for another chance to go for a sprint.

For the next few days at least, the sprinters will take a back seat, as the Vuelta heads into the high mountains. Although there's a small chance of a bunch dash on stage, eight, the next opportunity could only come in stage 11 at Urdax, a week further into the Vuelta.