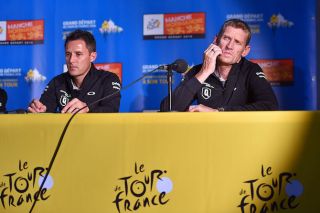 NTT Pro Cycling manager Doug Ryder has underlined the importance of the Tour de France, saying the running of this year's race is "critical" to the survival of teams during the coronavirus pandemic.

The Giro d'Italia and Spring Classics have all been postponed as COVID-19 has seen all racing put on hold until June at the earliest.

The Tour de France was scheduled to start in Nice on June 27 but the organisers have already looked into pushing it back by a month, while others see it as overly ambitious to expect racing to return in the summer.

Speaking on the BBC World Service's Newsday programme, Ryder stressed the importance of holding the Tour - which is comfortably the most important race for sponsors, given its scale - and hoped it could still be held in the summer.

"We're just hoping that, come end of June, the Tour de France can still take place - it's critical for us as teams that it does happen this year," he said.

"With the Olympic Games moving out a year - which I think is the right decision because people have trained and prepared for so long - it's tough, but the Tour de France could potentially move out a few weeks and still happen in July.

"So we've got hope that it could still happen and May 15th is the date they've put out when they'll make the call. So let's hope it's the right call and let's hope we can still be racing around France in July."

No Tour de France could realistically spell ruin for a number of teams, although the impact of the pandemic is already being felt. Riders at Lotto Soudal, Astana, Bahrain McLaren, and Mitchelton-Scott have all taken pay cuts or wage deferrals, while a number of non-riding staff members have been furloughed and some sponsors threaten to turn off the tap.

No such measures have yet been taken at NTT but Ryder stressed the strain that all teams are under, and the waiting game being played to see when racing can return.

"In cycling, we are a hundred per cent reliant on sponsorship so cycling can actually take a big knock and potentially it could be in trouble," he said.

"And some teams are suffering quite a bit and have made some drastic decisions to try and keep and maintain their sustainability in the sport. So it is a very, very, very tough time at this point.

"We're very fortunate that with NTT and our major sponsors are trying to do the right thing and trying to support us in as many ways as they can. At the moment, we are waiting and there's lots of conversations with the UCI – the governing body of world cycling – to understand when the season will start because the longer it goes on, the harder it then is to give returns to our sponsors."