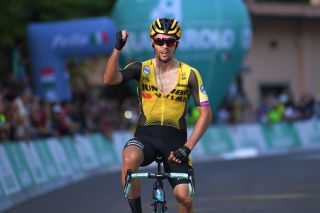 Jumbo-Visma's Primoz Roglic wins the 2019 Giro dell'Emilia, but has yet to race in 2020 (Image credit: Getty Images Sport)

Jumbo-Visma's Primoz Roglic remains focused on the rescheduled Tour de France as his big goal for the 2020 season, and hopes that his planned training and racing route to the race will see him arrive at La Grande Boucle in the best possible condition.

In an interview with Slovenia's national public broadcaster, RTV Slovenija, on Sunday, Roglic outlined his build-up to the Tour as including an altitude training camp in July followed by his first competition – the Tour de l'Ain stage race from August 7-9 – which will be the first time that he's race at all in 2020. It will be followed by the Critérium du Dauphiné – a traditional 'warm-up' race ahead of the Tour, from August 12-16 – and a second altitude camp ahead of the start of the Tour, which is set to start in Nice on August 29 and finish in Paris on September 20.

Roglic: We should assume the best about the new calendar

In further comments to the Slovenian Press Agency (STA), according to national newspaper Delo at the weekend, Roglic added: "Since the Tour is planned for the end of August, there's more than enough time for every rider who wants to take part in the race to prepare. If the [COVID-19] situation improves both here and elsewhere in Europe, I see no reason not to run the race."

Providing that Roglic can find the opportunity to attend one or more altitude training camps ahead of the Tour, he'll arrive in Nice for the start of the race in the best position possible to challenge for the title – alongside Jumbo-Visma teammates Steven Kruijswijk and Tom Dumoulin.

"Our main concern is that each of us prepares for the race as best we can," Roglic said of his team's planned three-pronged attack. "Only in this way will we be able to achieve the best result together.

"I want to be as prepared as possible for the Tour. We've outlined a plan for before the Tour, and if it all works out, all the doors will also be open when we finish the race," he said, looking ahead to the rest of the season, which will include the sport's biggest one-day Classics, with the team already having earmarked the Flèche Wallonne [September 30] and Liège-Bastogne-Liège [October 4] as possible further goals for Roglic.

"The Olympics Games were a big goal," explained Roglic. "In our original programme, we planned an immediate departure to Tokyo after the Tour, where we would already be competing in the road race six days after the Tour.

"That would have been stressful, so that [rescheduled season] will perhaps make it easier for us to plan our goals for next year," he said, with the Games having been postponed until summer 2021.