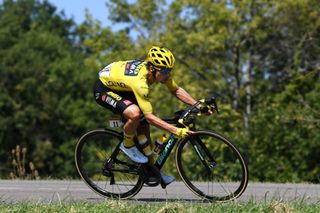 Tour de France leader Primož Roglič (Jumbo-Visma) has warned of the perils of losing focus in the third week as he goes into the final segment of the race with a strong team but a narrow overall advantage.

Roglič has first-hand experiences of things going awry in the last part of a Grand Tour, both when winning and losing the general classification advantage.

He had a tough third week of the Giro d’Italia last year, beginning with a fumbled bike change that could have led to a crash and ended up with him finishing third and saying, “it felt like a win to finish on the podium.”

In the Vuelta a España, even though Roglič came through victorious, he also had moments of inattention, including the Guadalajara stage where he all but lost the race in the crosswinds. He was entangled in a dangerous crash en route to a rain-soaked finish in Toledo, too.

Roglič’s remarks came when asked about the key points of the final week, and the Slovenian answered that the entire week would be crucial.

“Every day we see some guys going home, the main thing is to stay focussed,” commented Roglič through a recorded interview. He opted out of doing a traditional rest day press conference and preferred to limit his comments to a team video.

"When you are more and more tired, it’s easy to lose your concentration, stupid things can happen all the time and you can't afford that.

“So we’ll do our job. That’s the only thing, big mountains are still to come, specially La Loze [on Wednesday] and in the final time trial. That’s going to be a really important day.”

Roglič knows, too, that with only 40 seconds separating him from Tadej Pogačar (UAE Team Emirates) and a total of seven riders still at less than four minutes - constituting a more distant, but nonetheless real GC threat -  he can ill afford to make mistakes.

He did insist, though, that a Slovenian would be in yellow in Paris. “I’m confident about that, that name, we will see which it is, in one week or in a couple of days. Hopefully it’ll be my name.”

Given the relative strength of himself and Pogačar, not to mention the entire Jumbo-Visma squad, it is increasingly hard to see their domination of the upper end of the overall classification being bypassed in the three key days that remain in this year’s Tour.

Roglič has one less concern, in any case, concerning his own result for a COVID-19 test. Although technically the team is not supposed to release results until Tuesday, he told his interviewer, “they say that we will have a negative test, so I’m really happy that we have one more week of racing.”

However, a team spokesperson later said they were not allowed to confirm that result and that not all staff results have yet been returned by the laboratory. This means that if Jumbo-Visma had two positive tests among their management, the team would, still, have to leave the Tour. But in any case, Roglič said he had not been concerned about the COVID-19 results, given he and the team had adhered to the regulations as strictly as they could.

“What can I do?” he asked rhetorically. “We follow the rules. We do everything that has to be. We are not stressing about that.”

Mixed feelings about the Grand Colombier

Roglič also said he had mixed feelings about not following Pogačar up the road when he attacked on the first Pyrenean stage, regaining a little under half of the time lost the previous day on the echelon stage into Lavaur.

“You always look back and say I’d have wanted to do this or that a little differently, but we are in great position,” he said.

He also had regrets, of a sort, concerning the stage to the Grand Colombier, where he said he opened up his final sprint for the line too far out, allowing Pogačar to win and gain four seconds thanks to the time bonus.

“Of course, I’m always disappointed when I lose,” he said. “But on the other hand, the team was really great, I was also strong, but I went too early, I just missed that punch in the last 50 or 80 metres. But the thing is we are there, we are all really strong and it’s a nice race.”

Roglič’s first challenge, in any case, will be Tuesday’s relatively straightforward stage to Villlards-de-Lans, a third-category ascent preceded by the first-category climb of Saint-Nizier-de-Moucherette, rising from the valley of Grenoble.

His rest day training ride was up the climb, Roglič said, meaning he will at least know the terrain for Tuesday’s main challenge. But beyond that, the real Alpine challenges will put the Slovenian to yet another series of serious mountain tests.