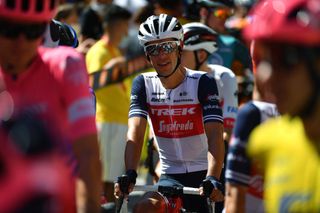 Richie Porte has backed former teammate turned rival Chris Froome to return to the Tour de France and vie for a record-equaling fifth title, despite his non-selection this year.

Speaking hours before Team Ineos announced their 2020 Tour line-up, Porte said he wouldn’t be surprised if Froome, in his comeback from a career-threatening injury, did or didn’t get selected this season, though wouldn’t discount his future.

However, 2018 Tour winner Geraint Thomas’ omission did later come as a shock to the Australian, who competed against both at the Critérium du Dauphiné last week.

"I was in races where Froomey was the one who ripped the races apart. He’s still got the engine, but I guess the time he missed off the bike is the biggest problem he is going to have," Porte said.

"But I definitely wouldn’t rule him out in the future years. I think the way he was getting better and better at stages through the race, he’s still got the engine of a seven-time Grand Tour winner."

Porte, who will enter his career 10th Tour de France on Saturday and for the last time as a yellow jersey contender, had backed Thomas as 'the man to beat' at Ineos when asked about Tour rivals that he gauged at the Dauphiné.

"For me, G was probably pretty smart about it all and I think he’ll be good in September," Porte had observed of the Welshman, whose shock assignment to the Giro d’Italia was announced soon after.

Defending Tour champion Egan Bernal, 23, who will lead Ineos at the race, didn’t come into Porte’s assessment until he was specifically asked about the Colombian, who abandoned the Dauphiné with a reported back complaint.

"Even when he wasn’t apparently going well, he was still climbing with me," said Porte.

"I guess he just needs to recover. He’s so young, when you’re that young you can recover a bit better. I think [with] the people he’s got around him there at Ineos, he’ll be good to go come September."

Dauphiné a shock to the system

Trek-Segafredo are set to send a more varied team to the Tour, able to target stages as well as the GC, compared to Ineos and Jumbo-Visma’s climber-heavy squads.

"We go in the with the goal of Bauke [Mollema] and I trying to be on GC for as long as we can and then take it a day at a time and see what happens," Porte said.

The 35-year-old resumed racing on August 3 and said he is happy with where his form is at ahead of what is being described as one of the hardest Tours in modern cycling history. He finished 15th overall at the Critérium du Dauphiné, dropping out of the top 10 on Sunday’s fifth and final stage.

"It wasn’t a low level that we were racing at, it was all the guys who will be racing the Tour, so the Dauphiné was a shock to the system," said Porte.

"It was five days instead of the traditional eight. It was just such intense racing and every day was just full gas from the start to the finish, so when I lost the time on Sunday to be honest it wasn’t unexpected because the day before I lost contact on the climb but came back in the descent before the finish. Sunday’s stage where [race leader Primoz] Roglic didn’t start and no team controlled, I don’t think anybody was ready for how hard it was going to be. That’s probably the only real negative out of that block of racing, is the final result there."

Jumbo-Visma confirmed themselves as a serious threat to Ineos’ dominance at the Dauphiné, where Porte said the squad was 'very impressive'.

"Maybe Steven Kruijswijk doesn’t start the Tour because of a crash that shouldn’t have happened but [Tom] Dumoulin was getting better and better every day. Roglic was a level above and then they’ve got the luxury of bringing George Bennett and Sepp Kuss into the fold," said Porte.

"You see Wout van Aert, who has probably been the rider of the year to be honest, a big Classics guy and he’s climbing with climbers. They’ve got a great team."

The Tour Down Under champion anticipates the final week of the Tour will be similar to the last day of the Dauphiné.

"It gets to a point sometimes when if you don’t go into the red every day and ride a little bit your own race and just follow for as long as you can then maybe that’s the tactic to take," he said.