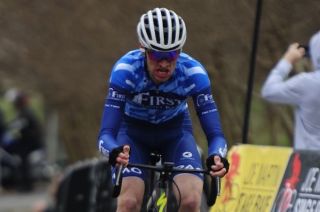 Bassett, who joined the Continental ranks in 2016 with Team Jamis and then spent two years on Silber Pro Cycling, has so far this year won a stage at the Redlands Bicycle Classic, two stages and the overall at the UCI-ranked Joe Martin Stage Race, won the Winston-Salem Cycling Classic criterium, and finished second at the USA Cycling Pro Road Race Championship behind Alex Howes (EF Education First).

“It was my best season by a factor of 10,” said Bassett, who started the season on the elite amateur level with First Internet Bank Cycling. “What seemed like a downgrade on paper was actually a huge opportunity for me and really revived my love of the sport and working hard.”

Zukowsky raced on Silber for two seasons before the team switched sponsors to Floyd’s Pro Cycling this year. He won the overall at the Grand Prix Cycliste de Saguenay in June with Floyd’s and was third overall at the Tour de Beauce.

“I think what really clicked for me was becoming more confident,” Zukowsky said. “Once you experience the feeling of being at the front of a race and in contention for a good result, you build confidence and realise that you have what it takes to win.”

The duo will join Rally’s all-North American roster as the team plans to expand its efforts in Europe next year. In its second year on the Pro Continental level, Rally UHC gained entry to a number of big European races, including Fleche-Wallone and Tour de Suisse, as well as the Tour of California, Tour de Luxembourg and Tour de Yorkshire.

Bassett said he is excited about the team's “high expectations and goals” in the European peloton.

“They’re taking huge steps into becoming major players in Europe,” he said. “I also pay attention to retention rates – once riders get to the team, they want to stick around.

“I’m looking forward to making a home in Europe,” Bassett said. “I think the team’s plan for the riders to build home bases in Girona, Spain, is a big step in becoming embedded in European racing. I’d like to be as helpful as I can to the team and also make some opportunities of my own to keep the fire burning.”

“I'm really looking forward to racing abroad and learning the race dynamics,” he said. “Traveling is a perk of the ‘job’ so visiting new places is always exciting. My individual goals will be focused around Tour de l'Avenir and Worlds as next year will be my last season as a U23. I do have specific races I would like to perform in, but I always do my best to be prepared and help the team whenever I show up.”