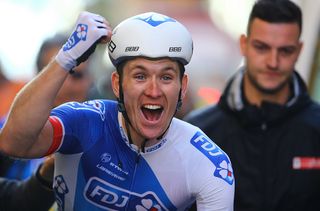 A handful of Groupama-FDJ riders may still be quarantined at their United Arab Emirates hotel following the cancellation of the UAE Tour amid an outbreak of coronavirus Covid-19, but that isn't preventing them from competing on their bikes this Sunday.

At least three of the riders still at the UAE hotel will ride Go Zwift's Denmark Cycling Union 2020 Cup Sunday morning to try and hold onto their early season fitness.

Arnaud Démare, David Gaudu and Ignatas Konovalovas will hop on their trainers at 10 a.m. Denmark time – 1 p.m. UAE time – to try and break up the monotony of life at the hotel, where they have been quarantined since the race was cancelled after stage 5 on February 27.

The Sunday event consists of three laps on a 26.6km circuit that features 232 metres of climbing.

The team's seven-rider roster of Démare, Gaudu, Konovalovas, Jacopo Guarnieri, Miles Scotson, Bruno Amirail and Ramon Sinkeldam, had, along with riders from Cofidis and Gazprom-Rusvelo, been at the hotel since the race was cancelled, although several FDJ riders were allowed to leave earlier this week.

Although most teams' riders and staff have been able to leave along with other race entourage and media, the Emirates health authorities decided to keep
members of Groupama-FDJ, Cofidis and Gazprom-Rusvelo confined to the fourth floor of the team hotel in quarantine until at least March 14.

La Gazzetta dello Sport reported that four riders tested positive for the virus. Cofidis and Groupama-FDJ confirmed their riders and staff all tested negative, but further testing appears to have discovered more cases amongst riders and staff of the Gazprom-RusVelo and UAE Team Emirates teams.