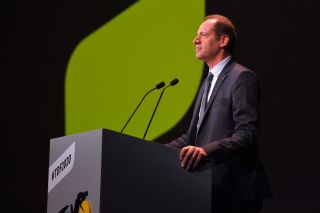 Race director Christian Prudhomme has said the process to assign wildcard invitations to the 2020 Tour de France was simplified by the fact that Total Direct Energie had qualified automatically via the UCI rankings and Israel Start-Up Nation had moved up to WorldTour level after taking over Katusha.

Cofidis, a perennial wildcard, earned an automatic berth this year after gaining promotion to an expanded 19-team WorldTour, which left just two invitations to be distributed at ASO’s discretion.

On Tuesday, it was announced that Arkéa-Samsic and B&B Hotels-Vital Concept had been awarded the final two places on the 2020 Tour, while Circus-Wanty Gobert missed out after three consecutive appearances.

"It’s always complicated to choose," Prudhomme told Ouest France. "Last year, there wasn’t a lot in it. For this summer, I admit that we would have been in difficulty if Total Direct Energie hadn’t already been invited thanks to their UCI ranking last year, and if Israel Cycling hadn’t obtained their WorldTour licence…"

It meant that, in essence, three teams were competing for the two final places. Arkéa-Samsic’s aggressive transfer campaign – they signed Nairo Quintana, Nacer Bouhanni, Winner Anacona and Diego Rosa – all but guaranteed them their place in the Tour peloton. After missing out for the first two seasons of their existence, B&B Hotels-Vital Concept might have struggled to retain sponsors had they not been given the nod this time around.

"In the end, the decision was made quite naturally," Prudhomme said. "For Arkéa-Samsic, there was no doubt. The team already has Warren Barguil […] and they added Nairo Quintana. They’ll make a fantastic pair.

"We gave the last place to B&B Hotels-Vital Concept. For their third season, we wanted to give them their chance. I think that the Tour route, with mountains and also medium mountains, will suit riders like Pierre Rolland, Arthur Vichot, Cyril Gautier… without forgetting their sprinter Bryan Coquard, who wins a lot of races."

After competing in the last three Tours, Belgian squad Circus-Wanty Gobert have been side-lined for 2020, at least in part due to the loss of French talent Guillaume Martin to Cofidis during the off-season. Martin placed 12th overall at the 2019 Tour.

"I can understand their disappointment. Wanty didn’t let themselves down on the Tour, the team animated the previous editions," Prudhomme said.

"But the fact that Guillaume Martin isn’t on this team anymore and the fact that the Tour isn’t starting from Belgium next summer [as it did in 2019 – ed] carried weight. And it must be said that national preference – in every country – plays a small part all the same. The Belgian teams experience the same thing with the invitations for Liège-Bastogne-Liège."