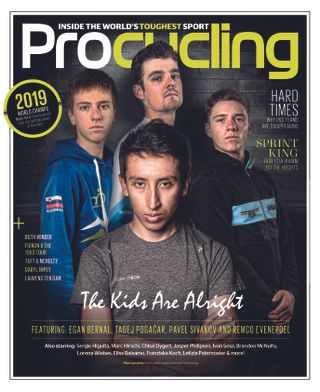 The 2019 season saw the emergence of a new generation of young male riders who dominated from the season’s start to end and, in the case of 22-year-old Egan Bernal, won the biggest victory of them all at the Tour de France.

The November issue of Procycling, which is out now in the UK, celebrates the sport’s brightest talents, including Bernal, Remco Evenepoel, Tadej Pogacar and Pavel Sivakov. All were photographed exclusively for the magazine with inspiration taken from The Who’s ‘The Kids Are Alright’ album cover. This month’s issue also comes with a free 2020 calendar.

Click here to start a print or digital subscription.

Bernal won his debut Tour title this July, and in doing so became the race’s youngest winner in since 1909. The Colombian, who also took victories at Paris-Nice and the Tour de Suisse this spring, gave Team Ineos its seventh Tour win in eight years and he took the yellow jersey in dramatic style on a weather ravaged stage to Tignes.

Bernal spoke to Procycling about the emotions he felt racing in France this summer as well as his plans for 2020.

“Imagine how it feels like to be finally on the attack like I wanted to be and my legs were feeling great then somebody drives up and tells you have to stop and that the race has been neutralised. And then on top of that, I ended up being in yellow. I’m never going to forget that day and how I got the lead,” Bernal said.

While Primož Roglič may have become Slovenia’s first grand tour winner at the Vuelta a España in September, hot on his heels was neo-pro compatriot Tadej Pogačar, who finished on the podium in Madrid behind him in third.

Remarkably, Pogačar who was then just 20 and in his first season for UAE Emirates, wasn’t even sure he would be on the Vuelta start line until this summer but proved his worth and more by also taking a hat-trick of stage wins along the way. Alasdair Fotheringham was in Spain to witness Pogačar’s rapid rise and spoke to the Slovenian teenager about his rapid rise.

Few shocks have come bigger in cycling this year than teenager Remco Evenepoel winning a race as long and as gruelling as Clásica San Sebastián, as he did this August. The 19-year-old jumped straight from junior ranks to the WorldTour this year with Deceuninck-Quick Step and adapted instantly, winning five races including San Sebastián after a solo attack. Barry Ryan profiles the Belgian wunderkind who is taking it all in his stride.

Alongside Bernal, Ineos have another talent in Pavel Sivakov. Italian-born, French raised to Russian professional cyclist parents, Sivakov has found his perfect home in the increasingly internationalising Team Ineos. Paul Knott went to meet the 22-year-old winner of the Tour of the Alps and Tour of Poland to talk about his cosmopolitan background and where he goes from here.

Why is it that so many riders are now achieving success at such a young age? From newly-crowned world time trial champion Chloé Dygert, to Bernal’s climbing compatriot and Ineos team-mate Ivan Sosa, to Dutch sprinter Lorena Wiebes - the men’s and women’s pelotons are awash with young talent making waves this year. Procycling looks at the riders who are set to dominate for the next decade.

Young riders have, however, always had the ability to surprise, and there is a trail through history of those who broke the convention that cyclists must peak in their late 20s. None were more true than Laurent Fignon, who back in 1983 won a debut Tour title aged just 22, like Bernal. William Fotheringham revisits the similarities between then and now in this month’s Retro feature.

Rally UHC Cycling’s Svein Tuft and Brandon McNulty are two riders at the opposite ends of the career spectrum; Canadian Tuft, 39, retires this winter while McNulty, 21, will move up to the top ranks next year with UAE Team Emirates. Patrick Fletcher sat down with the duo to hear the contrasts between their pathways to cycling and share words of wisdom they’ve learned along the way.

Plus, all the analysis from the last month of racing, the latest products in cycling, the world’s best cycling photography and an update from our diarists.

Procycling magazine: the best writing and photography from inside the world’s toughest sport.