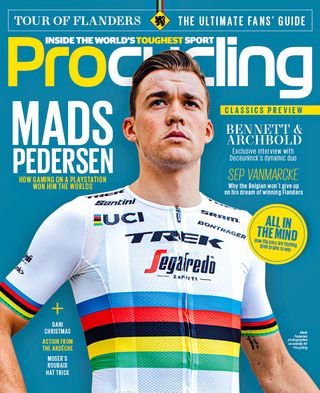 In September last year, Mads Pedersen became one of the youngest riders ever to win the World Championships men's road race title, also becoming Denmark's first elite male winner in the event. Then just 23, underdog Pedersen surprised most when he beat Matteo Trentin in the sprint for the line, after an attritional, exhausting race held in torrential conditions in Yorkshire.

Procycling met with Pedersen at the Tour Down Under in January, ahead of his debut in the rainbow stripes, to look back on that life-changing day and find out how he did it. It turns out playing computer games was key.

"Sometimes straight after training, we play Formula 1 game on the PlayStation because it keeps you focussed, when you're tired, for 15 minutes more," Pedersen told Ellis Bacon. "It's just a small exercise we do sometimes… to kind of put your body and your mind on the same level of tiredness."

One rider who is still searching for that career-defining victory is Sep Vanmarcke. The 31-year-old Belgian is one of the most consistent performers in the spring classics - having finished on the podium and in the top five multiple times at the Tour of Flanders and Paris-Roubaix - but has yet to land a major one-day race victory.

Jeremy Whittle met with the EF Pro Cycling rider to talk about his classics quest, love of gravel and fitting into an American squad.

"For me it's always been hard to win and will always be hard to win," Vanmarcke explains.

The Tour of Flanders is the biggest bike race in Belgium, and its history, geography, culture and politics make it a spectacle unlike any other in the sport.

Edward Pickering speaks to former rider and now DS Tom Steels, the mastermind behind the wheel of the Deceuninck-Quick Step car during the classics, about how to succeed at Flanders. Mike Phillips explores the political context against which the Ronde takes place, while Flandrian Stijn Vandenbergh, born and raised in Oudenaarde where Flanders finishes, tells Procycling about his love affair with the race.

While Omloop Het Nieuwsblad and Kuurne-Brussels-Kuurne were taking place in Belgium, there was an alternate 'Opening Weekend' being held over in southern France at the Faun Ardéche Classic and Drôme Classic. With Julian Alaphilippe, Vincenzo Nibali, Warren Barguil and Romain Bardet in attendance, Procycling sent photographer Jesse Wild to snap all the action. With epic weather, beautiful scenery and two absorbing races, it's clear why these races are growing in stature every year.

Lotto Soudal's Dani Christmas is rare for being able to say she's competed for Great Britain in both athletics and cycling. The former runner only took up cycling in 2013, but in seven short years is now in her second year with the Belgian squad. Christmas tells Sophie Hurcom about her unconventional pathway and rapid rise.

Few know how crucial the relationship between sprinter and lead-out rider is better than Sam Bennett and Shane Archbold, who have been teammates on and off since 2013. Having started together at An-Post, then Bora-Hansgrohe, the duo joined Deceuninck at the start of this season. Sophie Smith spoke to the pair as they prepared to get going about why they work so well together.

Also inside this month: James Witts investigates the effect of trans-cranial direct current stimulation (in short, low-level electric currents past through the brain) and whether the best physical gains can be found inside the brain.

William Fotheringham looks back on the career of Francesco Moser, one of just two riders to have ever won Paris-Roubaix three times consecutively. Our diarists James Knox, Heidi Franz and Roger Kluge update us on their month in cycling and Laurens ten Dam gives us his thoughts on Jasper Stuyven's Omloop Het Nieuwsblad win.