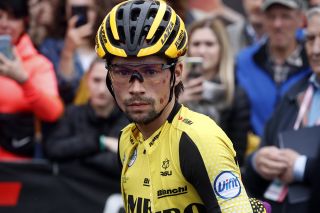 Primož Roglič has spoken about the rescheduled Tour de France, contenders and his Jumbo-Visma co-leaders, saying that pure strength will decide who leads Jumbo, and adding that it could be difficult to stop Nairo Quintana at the race, given the Colombian's early-season form.

Roglič said that he appreciates Quintana's move to Arkéa-Samsic after spending eight years at Movistar, noting his wins at the Tour du Var and Tour de la Provence, as well as the final mountain stage at Paris-Nice earlier this year.

"I think it was a good decision because at the beginning of the season he had some very good victories," Roglič said to AS Colombia. "But we must see how the return is for us all at the start of the calendar. I don't think he has any disadvantages because he's at Arkéa.

Kruijswijk: In the end, the strongest rider wins the Tour de France

"He has already shown how strong he is this year. In the Tour it will be difficult to stop him."

Roglič will be joined in France by his 2019 co-leader Steven Kruijswijk, as well as new signing Tom Dumoulin as the Dutch squad look to take the fight to Team Ineos. George Bennett, Sepp Kuss, Wout van Aert, Tony Martin and Robert Gesink will join the trio as part of Jumbo-Visma's 'super-team', on paper the second strongest at the race.

"It's nice. We're stronger as a team so it's a good thing. I think the three of us are really capable of being leaders in the Tour. In the end, what we do is train to achieve the goals as a team and we will do that. I have trained with them and everything has gone well.

"The strongest will be the leader," he added, echoing Kruijswijk's recent comments. "I hope I can, but we will see who is best."

They'll face stiff competition from Ineos, who have three potential winners of their own in Chris Froome, Egan Bernal and Geraint Thomas – riders who have won seven of the past nine Tours. Roglič said that he respects Froome's decision to switch to Israel Start-Up Nation next season, ending an 11-year association with Ineos/Sky.

"I respect Froome's decision," he said. "I can't say much but he is definitely one of the champions of this generation of cycling. I'm sure he'll do what is necessary to return to his highest possible level. We'll have to wait to see how he will be at the Tour, where he'll surely be fine.

"Bernal is the winner of last year's Tour. He's a champion and will surely be very, very strong this year. I appreciate [him saying I'm his main rival]. But it's just a wish; I hope it happens. I hope I can be in the top places at the Tour."