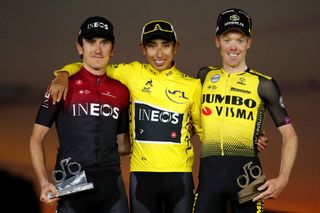 Jumbo-Visma's Steven Kruijswijk foresees no problems with his team taking three leaders to this summer's rescheduled Tour de France. The Dutchman, who finished third at last year's Tour, has told the Dutch media that there's an inevitability to the final result – "The strongest rider wins the Tour de France" – although he hopes that it will be him, Primoz Roglic or Tom Dumoulin.

Kruijswijk took the final spot on the podium in Paris last July behind Team Ineos duo Egan Bernal and Geraint Thomas. Like many others, he expects the principal battle to again be between Ineos and his Jumbo-Visma team.

"If you look purely at the line-up of our team and that of Team Ineos, we are surely the two strongest and biggest contenders," he told NOS in a video interview on Monday. "Hopefully we'll be able to pull the longest."

While Jumbo-Visma had decided on the make-up of their squad even ahead of the start of the season – and have made just one change, bringing in New Zealand's George Bennett in place of Belgian rider Laurens De Plus – Team Ineos have yet to unveil the eight riders who will line up in Nice on August 29.

Defending champion Bernal will be there, as will 2018 winner Thomas, but a question mark hangs over four-time winner Chris Froome's participation on the back of the news that he will move to Israel Start-Up Nation next season, although it was widely thought that Ineos would match Jumbo-Visma's approach of taking three leaders to the Tour.

While he's now deep into intensive training for the Tour, Kruijswijk is yet to race in 2020. The same applies for teammate and compatriot Dumoulin, while Slovenia's Roglic rode and won his National Championships road race late last month, and finished second in the time trial.

By now, Kruijswijk and his teammates would normally have been already battling Team Ineos at the Tour de France, but the race's postponement due to the coronavirus pandemic means that the riders are now busy preparing for the Grand Départ in Nice at the end of next month.

"It's a new situation for all of us, so we're curious," said Kruijswijk of the changes to the calendar. "But the goal is to win the Tour as one team.

"Of course, every sportsman wants to win, and one of us could take that victory, but we need each other for that," he said.

"In the end, the strongest rider wins the Tour, in which we're trying to spread our chances of winning," Kruijswijk said. "If it becomes a tactical game, then you're better off sitting with three men at the front."

The 33-year-old is set to start his 2020 season at the Tour de l'Ain in France (August 7-9), and then remain in France to try to eliminate any problems surrounding COVID-19 and international travel, riding the Critérium du Dauphiné (August 12-16) before lining up for the Tour de France in late August.