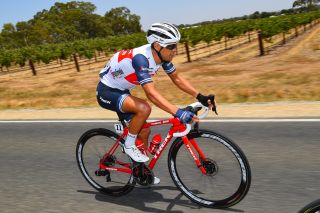 Richie Porte (Trek-Segafredo) at the 2020 Tour Down Under (Image credit: Bettini Photo)

Rohan Dennis and Richie Porte avoided losing time on stage 2 of the Tour Down Under after a late puncture and a pile-up with 1.5km to go tested their resolve on the road to Stirling.

Dennis had to chase with Team Ineos teammate Luke Rowe after he punctured with 20km to go, when the pace was high in the rolling finale. Porte went down in the crash that involved around 30 riders and partially blocked the road as the peloton jostled for position before the flame rouge.

Porte was left with grazes on his left knee but was not hurt. Simon Yates (Mitchelton-Scott) came off much worse and suffered a nasty cut to his left knee; he is unlikely to continue in the Tour Down Under.

Elia Viviani suffered road rash to a large part of his upper body. He went to hospital for a scan and treatment and, while fractures were ruled out, he may also struggle to continue in the race.

"It just all happened right in front of me, so I had nowhere to go, I came away pretty well unscathed. It was always going to happen, it was a nervous finale. It wasn't a hard day, so I wasn't surprised when I went down," Porte said post-stage.

Porte did not panic after the crash, knowing it had occurred inside the final three kilometres and that he would be given the same time as the stage winner, keeping his title hopes alive.

"You do know but still, I guess if you're impeded by the crash, then the rules are there, but you still try and get back to the finish as quick as you can. I was straight on the bike and I had López there with me and we rode onto the finish," Porte said

Porte was unable to fight for the stage victory and the precious 10, six and four-second time bonuses for the top three. His biggest rival, Daryl Impey (Mitchelton-Scott), winner of the past two editions, finished second behind Caleb Ewan (Lotto Soudal) and so picked-up six seconds.

Thanks to the bonus seconds he snatched at the intermediate sprint on stage 1, Impey now leads Porte and his other overall rivals by 10 seconds.

However, Porte is convinced this year's Tour Down Under will not be decided by time bonuses.

"Daryl's obviously going well, he was second on the stage today and so he's in front a bit but it's a different finish tomorrow," Porte suggested of stage 3, which ends with a climb up to Paracombe.

"I think it's harder this year. The way Mitchelton are riding it, they've got the team to do what they're doing. Daryl's obviously on stomping form so it makes sense to back him. Daryl's the guy that's won this race twice so he's probably the biggest threat."

Dennis thanks Rowe after late puncture

Rohan Dennis gave Rowe a grateful hug after the finish, thankful the Welshman was on hand to help pace him back to the peloton after his mechanical.

"Luke did a big effort to help me get back on, that was huge from him. He sacrificed the lead-out for Chris Lawless too but I'm the leader here, along with two other guys. To have that support is a huge confidence for the race to come," Dennis said, his chase back to the peloton giving him a confirmation of his fitness before Thursday's important finish up to Paracombe.

"We were always going to get back but it depended how much effort we had to make. I actually felt quite good up there. I'm not going to say I'm going to blow everybody's doors off on Paracombe but it was a good sign I can recover and feel good in the finish," he said.

The addition of Paracombe has changed the likely outcome of this year's Tour Down Under, with a puncheur like Daryl Impey perhaps struggling to hold into the attacks on the steep climb and then again on the final stage to the top of Willunga hill.

"When Richie won on Paracombe in 2017, he took about 20 seconds out of everyone and that was on the faster way onto it. It's harder this time and probably suits him even better, making him the guy to beat," Dennis said.

"If you win up Paracombe, I think you'll be pretty hard to beat overall."