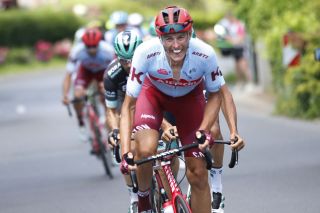 Nils Politt has a Plan B in place should Katusha-Alpecin fold at the end of the current season.

The 25-year-old is one of 11 current riders on the team roster with a contract for next year. However, with Alpecin and bike supplier Canyon set to leave and no current financial solution in place the existing squad are in limbo.

The latest development to save the team involves a deal between the current team owner Igor Makarov and the Israel Cycling Academy, who would take over the WorldTour license from the Russian and so step up to WorldTour level.

That deal has yet to be ratified and the UCI have a key deadline of October 1 for when bank guarantees, rosters and other documents must be submitted to secure a 2020 WorldTour licence.

Katusha's management has been chasing additional funds to prolong the team since the start of the year and at the Tour de France they remained confident of finding a solution.

However, several months have passed and with general manager Jose Azevedo confirming to Cyclingnews last week that he would leave regardless of the squad's future, and the fact that new contracts have been postponed, the situation is now critical.

Politt is one of the few current riders on the team who has enjoyed a successful season. He capped a fine Classics campaign with second at Paris-Roubaix and will have no shortage of offers if Katusha-Alpecin fold. But this has not been an easy few months for any of the riders and staff involved.

"For sure it's not a nice situation," he told Cyclingnews at the Road World Championships in Yorkshire.

"Until now we still don't have any news and we have to wait. The first of October is not far and I think on that date they have to decide something. For sure I have a plan with my manager but first of all, I have a contract with Katusha and if they continue I will stay."

If Katusha does continue, under their current lead sponsor's name or another, Politt is tied to the operation. When asked if he wanted to remain with the squad if they continued the 25-year-old replied: "I have to stay there. I have a two-year contract. I have to ride one more year for Katusha."

Even if the team does continue their plans of strengthening their roster around Politt have been hampered by their ineffectiveness in the transfer market.

The riders who could have conceivably been signed to help Politt in the Classics have already been snapped up by other teams, while the Katusha management has understandably prioritised survival ahead of expansion and new signings.

"It would have been better if we'd had a clear situation in June or July. There are a lot of good riders already gone to other teams. The market isn't the same situation now as it was earlier in the year. I have to take that situation and do the best out of it. This year was also good for me and I now need to just focus on the Classics for next year."

"I have my Plan B but I don't want to talk about it. First I want a clear answer on if I have to stay."

Politt was competing in the mixed team time trial on Sunday at the World Championships where he was part of a German team that secured a well-deserved bronze medal.

While the German men appeared to struggle the three women on the team performed impeccably and helped secure second place behind the Dutch and ahead of the host nation Great Britain.

The event itself divided opinion after it controversially replaced the trade team time trial as the opening event at the World Championships. Politt believes that the mixed event will improve over the coming years, and that stronger squads will take the event more seriously as the event grows.

"We can be really proud with the silver medal," he said.

"In the end, it was a great event. It was just the first time so it takes one or two years before we see other nations like Australia coming to the event. Maybe this is the first time that this and see that it's not a bad event."