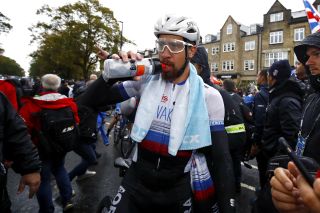 Peter Sagan admitted he missed a golden opportunity to win a record-breaking fourth World Championships road race title in Yorkshire on Sunday, saying he chose not to follow what turned out to be the decisive attack containing eventual winner Mads Pedersen, despite feeling strong enough to have done so.

Sagan won Worlds three times in a row from 2015 to 2017, and victory in Yorkshire would have taken him past Eddy Merckx, Alfredo Binda, Rik Van Steenbergen and Oscar Freire as the all-time record holder.

While many pre-race favourites suffered in the cold and rainy conditions, Sagan felt strong physically. However, he chose not to react when Mathieu van der Poel and Matteo Trentin combined to launch the first major attack with 33km remaining.

Even though Van der Poel surprisingly blew up with 12km to go, Trentin and the rest of the lead group would stay away to the finish, where Mads Pedersen (Denmark) claimed the world title.

Sagan attacked from the chase group 4km out but with the gap at 1:20 the rainbow jersey was gone, and he could only finish fifth, 43 seconds after Mads Pedersen.

"I'm not disappointed - that's a cycling race. I felt very good, I think, but I just missed the opportunity to be in the front [group]. I could've been in the front but I thought the race was going to come back for a sprint," Sagan told Cyclingnews in Harrogate.

"I just chose my opportunity and in the end it turned out differently. I waited, and in the finale I tried, because I wanted to compare [myself] with the others. It was good, just, I missed the chance to be in the front."

At first, it seemed there was enough firepower in the 30-rider chase group, with four Belgians working for Greg Van Avermaet and a decent group of Frenchman around Julian Alaphilippe. However, the gap to the five-rider lead group grew and grew on the final two laps of the 14km Harrogate circuit.

With one lap remaining, it was up at 48 seconds, and any hope the race would come back together disappeared just a few kilometres later when it went out to 1:25.

"I expected more countries to be stronger, but the weather, I think, took a lot of guys out of the race because they'd frozen and they didn't finish," Sagan said.

"A lot of countries were weaker than normal. I think that's why the race was like it was. But congrats to the first guy."

Asked if he had any regrets, he added: "You never know, I just missed it and I cannot complain."