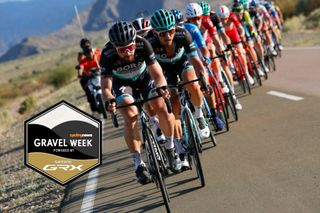 Peter Sagan still has a huge amount to achieve on the road as he looks to add to his immensely impressive palmarès, but the three-time world champion also wants to dabble in gravel racing when his full-time job in the WorldTour comes to an end.

The Slovak is enticed by the community spirit displayed at gravel races, and although he would prefer to participate rather than compete, the Bora-Hansgrohe leader believes that the discipline has huge potential to expand over the coming years.

"I'm a professional road rider and even if I enjoy the occasional fun ride, I'm fully focused on my road races for the time being," he told Cyclingnews.

"If I had to consider a competitive race off-road, it would be on the mountain bike. I could, potentially, take part in a gravel race, at some stage in the future – but it would be for fun, to have a good time with my friends and the other participants, to enjoy the course and the views but not towards a result. I wouldn't be competing in a gravel race, I would be simply taking part."

Sagan, currently in Austria at Bora-Hansgrohe's pre-season training camp, occasionally trains off-road because he, "thinks it helps you work on your bike-handling skills." When asked whether some of the major off-road races in the US, like the Leadville 100 and gravel-specific Dirty Kanza excited him, he was enthusiastic about one day taking part.

"Absolutely, these events would excite me. I think I will have to tick those boxes in the future but, again, as a simple participant. For me, the result wouldn't be the aim but just to enjoy the ride, experience the ambiance and mingle with all the other riders.

"Don't forget that in the Sagan Fondos we held in the last couple of years we always included quite a bit of gravel roads. It was a nice combination, people liked the format and so did I. First question, first and foremost, I race on the road. I would consider taking part in gravel races after the end of my road racing career to have fun."

The growth of gravel racing and riding in the last two years has been huge. Races have taken off and expanded, while the scene has attracted riders from the WorldTour. Peter Stetina and Laurens ten Dam have switched to the discipline on a full-time basis, while several others, including numerous EF Pro Cycling riders, have taken part in high-profile races such as Leadville and Kanza.

As a participation and community sport it has won fans through being more inclusive. Sagan has seen the growth at first hand and pinpoints a number of reasons for gravel's reputation.

"I think it has a bright future," he said. "Firstly, it is safer for the average amateur cyclist because you ride off-road where there are much fewer vehicles. Just that by itself is an important psychological factor that can push more people to go on their bikes, especially in areas with heavy road traffic.

"In addition, there is a whole new range of gravel bikes that allow people with very few skills to ride easily on dirt roads. I'm sure you have watched my videos riding on the brand new Specialized Diverge that we shot in Colombia.

"Of course, you don't have to be as adventurous as I am but with such a stable bike that handles very well, a wider range of people can take on this discipline. If you can safely and comfortably combine asphalt and dirt roads, you have more options on where to ride your bike."

GRX is designed from the ground up for Gravel adventures. Mix and match components to customise your bike for a wide range of terrains – and ride the way you want! Find out more at: gravel.shimano.com/en/components