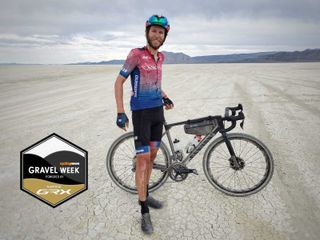 Last year, Peter Stetina made the biggest and boldest move of his professional career. He hung up his WorldTour licence, waved goodbye to the elite of road racing, and began on a new path of rewards, responsibility, and above all, adventure.

Stetina's first full-season as a gravel racer hasn't quite followed the script. The global COVID-19 pandemic shut down races for most of the year but that hasn't stopped the American from creating new forms of coverage around the sport. Earlier this month he flew to Atlanta, bought a van, and journeyed home, tracking his riding along the way for a soon-to-be-released film.

His 'Let's Privateer' campaign – brought together in association with Sportful and Canyon – has also taken off, and when racing does finally resume the former mountain domestique will be ready to roll. His transformation from WorldTour rider to self-employed entrepreneur gravel rider has stemmed from one simple standpoint.

"I love bike racing. It's that simple," he tells Cyclingnews. "I left the WorldTour still in the prime of my career. I'm still competitive and want to race. That's what I've done for the last decade but I'm fully addicted to the community spirit around gravel events.

"It comes in an equal balance between the competition and the community but it's something that I want to embrace and be a part of. Those experiences are so much sweeter when they're shared.

Stetina: I had to hit WorldTour level watts to take Grasshopper win

Stetina to leave Trek-Segafredo at end of 2019

"Life in the WorldTour can be so much more extreme and it's not always relatable to the masses. But once I started gravel I could see that everyone on the same course had those shared experiences and stories."

Stetina dabbled in gravel last year but he found out relatively quickly that balancing the WorldTour demands and a gravel calendar was too onerous. He made his choice and hasn't looked back.

While making use of a handful of long-standing relationships that he had made over the years, Stetina built his gravel project almost from scratch. He sought sponsors and equipment, designed his race plans, and made sure that his voice was at the center of all the creative ideas.

"It's 100 per cent different to the WorldTour. I'm a one-man team out there doing it for myself. I'm my own boss and anyone can relate to that in terms of starting their own project from the ground up. It's gratifying and gives you freedom. Of course, it means a lot more work but it's a lot more fun. You can focus on creating your story and you learn that it's okay to say no to things you don't want.

"The hardest part is just the overall hustle. In the WorldTour, even though it's physically hard, everything is taken care of for you from the logistics to the contracts with sponsors. You get your gear, you're sent flight tickets and you're fostered in an environment when you just have to focus on pedaling your bike."

"In my world I'm now creating business plans and sponsorship ideas. You have to be more of an entrepreneur and it's not just a case of sticking your name to things. Being fast on the bike is almost secondary at times, although this definitely wasn't a retirement. Nowadays I can pivot towards what I want to do and jump on it with my sponsors. I can create so much around this opportunity."

Stetina's creativity has lead to the 'Let's Privateer' campaign that follows him as he embarks on his gravel career. It's an example of how Stetina has brought together sponsors and tapped into the emerging gravel scene.

"It's mainly a call to arms to embrace your inner privateer because anyone can really do it. You can speak to any cyclist coming to gravel and ask them how they want to do it their way when it comes gravel events, but my ethos was pretty simple in that I was still racing and that this wasn't going to be a retirement tour. I still very much care about the performance but I also care about the community and the fun around the gravel scene."

Looking for professional advice on gravel and all other groupsets? Your local font of knowledge is your nearest Shimano dealer. Discover yours here: gravel.shimano.com/en/dealers