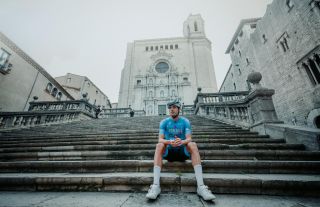 With the obvious exception of home training platforms, no sector of professional cycling is going to escape the COVID-19 pandemic unscathed, but among the most concerned will be young, aspiring riders. At a time when they’d ordinarily be plotting the next steps in their careers, opportunities are at real risk of drying up, temporarily if not permanently.

Freddy Ovett is among them and, in the absence of any real-life racing to showcase his talents, the 26-year-old Australian did the next best thing, beating Mathieu van der Poel and other WorldTour pros in the first stage of the virtual Zwift Tour for All on Monday.

Ovett is something of a late bloomer, only taking up cycling five years ago after originally following in the running footsteps of his father, Steve, the 1980 Olympic 800 metres champion. He previously rode for AG2R La Mondiale's U23 squad and the prestigious SEG Racing Academy, before spending trainee stints at BMC Racing and Israel Start-Up Nation.

Ovett claims stage 1 of Zwift Tour for All

How to watch Zwift Tour for All – live stream, TV and results

WorldTour teams to race Zwift 'Tour for All' on live TV

Now riding for Israel’s Continental squad, he has profited from a change in the UCI rules that allows riders on a Continental team affiliated to a WorldTour outfit, to make appearances for both throughout the year. After riding the Tour du Rwanda with his WorldTour colleagues, Ovett joined Dan Martin and others on the virtual start line on Monday and put a quality field to the sword.

“I’m not sure you can read too much into me beating Van der Poel in a sprint, but I’ll take it for now,” Ovett, who considers himself more of a climber, told reporters in a post-race video press conference.

"It’s a bit of a timing thing. If we looked at the numbers, I’m sure Van der Poel will have ridden a lot harder than I did throughout the race, because maybe he’s not as experienced on Zwift."

In any case, Ovett, who has been plugging away to make it to the top level of the sport, grabbed the opportunity – albeit a virtual one – with both hands.

"The new UCI rule helps me a lot - I can flip flop a bit more instead of waiting for the stagiaire thing in August," he said.

"Riders need to think a bit differently in this period. There’s no way we can get results. The only thing we can do is this, or publicising the sponsors a bit more online or on social media. It’s time for riders to think a little more out of the box and not just from a results standpoint, because at the end of the day we’re billboards for our sponsors and they’re going through a hard time right now.

Despite the climate of uncertainty, Ovett feels confident he can finally make his dream of becoming a fully-fledged pro cyclist a reality. He revealed there’s a mutual understanding of a long-term vision at Israel Start-Up Nation, where he’s envisaged to sign a WorldTour contract before long.

"I back myself. I’m a hard worker, I know I’ve got ability as a cyclist and I’m in the right place. Israel know what they’re doing, and they’ve got a long-term plan set out for me," he said.

"I’m quite different to most. I came to the sport quite late and have a different story to most. The people at Israel appreciate that and know it’s going to take a bit of time to mould me into the rider that we both want myself to be in the future. The idea is we don’t want me to jump into the WorldTour when i’m not ready for it. I don’t think it’s a physical thing; it’s more understanding the racing, the tactics, the energy conservation in the peloton.

"I’ve only been riding for four and a half years, and I’m getting better. Hopefully I’m not too far away. We’ll just have to see when racing commences how things go."