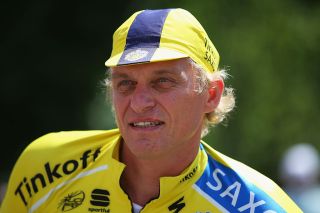 Oleg Tinkov, the former owner of Tinkoff-Saxo team, that included Peter Sagan and Alberto Contador, has paid bail of £20 million to avoid going to jail on remand after a provisional arrest warrant was issued by American prosecutors.

According to reports in Britain and leading financial media, the 52-year-old Russian billionaire first appeared in Westminster magistrates last week, accused by the U.S. Internal Revenue Service (IRS) of filing a false tax return in 2013 when he allegedly under-reported his income as a US citizen. The hearing is expected to last until April.

Tinkov paid the £20 million and so was allowed to stay in a luxury apartment owned by his wife in central London so long as he respects a 7pm to 7am curfew. He also faces an airport ban and must stay within the M25 motorway that surrounds London. He has had to surrender his passports and has to report to police three times a week.

Oleg Tinkov blog: Cycling existed before me and will exist after me

Bjarne Riis: Tinkov was envious of my respect within the team

Tinkov is reported to be worth £2.2 billion after creating and then selling a series of business, in the electronics, pasta, beer and most recently banking sectors. The online Tinkoff Bank currently has around eight million customers in Russia and Tinkov floated the bank on the UK stock market.

Still a keen cyclist, Tinkov raced in Russian as a junior, sharpening his entrepreneurial skills by buying jeans a training camp in the Ukraine and then selling them for a profit at home in Siberia.

He first sponsored a cycling team in 2005 when he founded Professional Continental team Tinkoff Restaurants. Tinkov ended the sponsorship in 2008 but returned to the sport in 2012 and bought the Saxo Bank team from Bjarne Riis in December 2013.

Alberto Contador won the 2014 Vuelta a España and 2015 Giro d’Italia with the team and Peter Sagan took multiple green jerseys at the Tour de France. However the team failed to topple Team Sky's dominance of the Tour de France, much to Tinkov's often public annoyance ands he eventually quit the sport after the 2016 season, giving a final interview to Cyclingnews.

Tinkov reportedly offered Dave Brailsford £17 million to take over Team Sky when the British squad was looking for a new sponsor but Ineos stepped in to save the team.

Shares in Tinkov’s umbrella company, TCS Group Holding Plc, fell six per cent on Monday as news of the trial emerged. TCS Group Holding issued a statement saying "Mr Tinkov is attending these court hearings in his capacity as a private individual – this situation does not impact any of the operating companies in Tinkoff Group (including Tinkoff Bank, Tinkoff Insurance and Tinkoff Mobile)."

According to the Sunday Express newspaper, the IRS has accused Tinkov of filing a false tax return and underreporting his 2013 income. Tinkov gave up his U.S. passport in 2013, the same year he sold a large part of shares in his company on the London Stock Exchange.