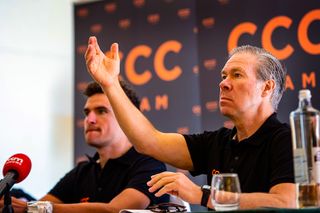 Time is rapidly dwindling for Jim Ochowicz and his Continuum Sports organization as they fight to keep their 2021 WorldTour ambitions alive, but the veteran team boss is still hoping that he can save the team at the last minute.

“I can’t put a percentage on it but I’ve pulled a rabbit out of a hat once or twice, so maybe I can reach in one more time,” Ochowicz, manager of CCC Team told Cyclingnews on the eve of stage 12 of the Tour de France.

Ochowicz certainly has a successful back catalogue when it comes to finding funds, having pioneered 7-Eleven and then the Motorola teams of the 1980s and 1990s. Motorola folded at the end of 1996 but Ochowicz later returned with BMC Racing in the mid-2000s. Their sponsorship ended in 2018 but Ochowicz was able to find a last-minute deal with CCC stepping up from the Pro Continental level.

A long-term deal was in place for CCC Team, but the COVID-19 pandemic decimated the Polish company’s finances and, despite pay reductions, the sponsor was forced to announce that they would end the sport at the end of this season.

Since March, Ochowicz has been looking for a replacement, but trying to find over €10 million during a pandemic is a tough ask. While there have been several interested parties but nothing has come of the discussions.

“It has ebbed and flowed since March but those interests have been played out and they’ve all at this point evaporated from their initial interest to an answer of ‘no.’ We’ve gone through a number of scenarios with different people for the last few months and that’s still going on, as there are still people knocking on our door, and we’re knocking on other doors. People are willing to talk, but as of today, we don’t have any commitments from anyone for 2021,” Ochowicz told Cyclingnews.

“We plan to continue and those discussions are happening now and as long as we still have some viability in terms of putting a team together we’ll keep trying.”

One of the parties with whom Ochowicz had initial discussions was Manuela Fundación. The Spanish entity had been in negotiations with Mitchelton-Scott and a letter of intent had been signed, but after a public spat between the Australian team and the leaders of the Manuela’s cycling arm, the deal was quickly dissolved. Ochowicz wouldn’t comment on why his talks with the Manuela Fundación had failed.

“After the initial interest with Mitchelton-Scott played itself out, and I don’t know why, they contacted us and we had some discussion but they have stopped. There were a number of issues and some things just weren’t able to be accomplished.”

Ochowicz also wouldn’t give a deadline on when he would cease looking for a new sponsor but the choice – at least for 2021 - could soon be out of his hands as teams must meet a set number of deadlines with the UCI when it comes to paperwork.

“I don’t think that we need to say. At some point it’s going to be down to UCI regulations and applications around the WorldTour,” he said.

“We have sent in the original requirements that were due several weeks ago but the next UCI requirement is due by October 1. That’s not the end-all date but there are certain benchmarks around what you need to accomplish by several dates. We’re going to keep trying until they tell us to forget it.”

At 68, and after a long career within the sport, there is a chance that Ochowicz decides to cash in his chips, sell his WorldTour license and retire, but the American appeared to have no such thoughts at this stage, even suggesting that if a sponsor for 2021 couldn’t be found he could potentially sit out a year before returning in 2022.

“It’s a wind-down process and it takes a while,” Ochowicz said in relation to ending a team.

“I did it once before with Motorola. It takes a good year to wind everything down and there’s a lot of paperwork involved. You need to clean up before you close the door and that would take at least six to nine months in 2021. During that period something might come up that wasn’t available this year. Some of the groups we talked to certainly had concerns about the pandemic and how that would affect their businesses in the short term. We’re not going away that fast so that on January 1 you’ll never see us again,” he added.

If Ochowicz does pull a rabbit out of a hat and finds a backer, then building a roster should be relatively easy. He once signed Phil Andersen in the depths of winter, and with so much uncertainty on the market there are scores of riders who remain free for 2021. So even with Greg Van Avermaet and Matteo Trentin bound for new shores, Ochowicz should have the talent from which to build a strong team – if he can find the funds with which to do so.

“There’s certainly enough riders to put together a WorldTour team, and we do have some other options with transfers, and that might be something that we might entertain,” said Ochowicz.