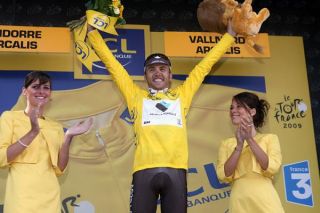 Rinaldo Nocentini has confirmed his retirement at the age of 42 after twenty years as a professional rider. The Italian spent the last four seasons of his career in the green and white hoops of Portuguese squad Sporting-Tavira.

After placing second behind Ivan Basso in the under-23 road race at the 1998 World Championships in Valkenburg, Nocentini turned professional with Mapei the following year before moving on to Fassa Bortolo, Formaggi Pinzolo and Aqua e Sapone, where he won the Giro dell'Appennino, Giro del Veneto and Coppa Placci in 2006.

Nocentini’s greatest success came during his nine-year stint with AG2R La Mondiale, which included an eight-day tenure in the yellow jersey on the 2009 Tour de France. He reached Paris in 13th place overall, his highest finish in a Grand Tour. The following year he won the general classification at the Tour Méditerranéen.

After leaving AG2R La Mondiale at the end of 2016, Nocentini opted to continue his career at Continental level with Sporting-Tavira and he sprung a surprise when he placed third at the 2017 Italian Championships in Ivrea behind Fabio Aru and Diego Ulissi. Nocentini’s final victories as a professional came in early 2018, when he won two stages at La Tropicale Amissa Bongo. His final race as a professional came at the Trofeu Joaquim Agostinho in July.

“If I’ve kept riding up to 42 years of age, it’s because I spent the last part of my career in Portugal, in a much calmer and more relaxed atmosphere than in the traditional European cycling countries. Otherwise, I would have finished sooner,” Nocentini told Tuttobiciweb.

The Tuscan lamented some of the changes he had witnessed in cycling across his two decades in the peloton, including the use of email and smartphones for communication.

“Even in the hotel, people don’t stay together talking anymore, everybody shuts themselves up in my room. That’s weighed on me a lot these last years, because I like to be in contact with people but instead it happens that you can go through the whole year without seeing some of your teammates even once,” Nocentini said.

“When I turned professional with Mapei in 1999, the atmosphere was more familial, but season by season, that’s changed and, in my opinion, not for the better. Being a rider today is very stressful.”

Nocentini will soon begin his new professional venture when he opens a training, biomechanics and nutrition centre in Civitella, near Arezzo. Speaking to Tuscan newspaper La Nazione last month, he pointed to his spell in the maillot jaune as the high point of his career.

“I gained in popularity and on an economic level, but above all, it was an enormous satisfaction,” Nocentini said. “10 July 2009 will always be imprinted in my mind and my heart. I got in a break from distance and it was a summit finish in Andorra. I sacrificed the possibility of winning the stage to get the yellow jersey and for several days, I had [Alberto] Contador and [Lance] Armstrong behind me on GC.”