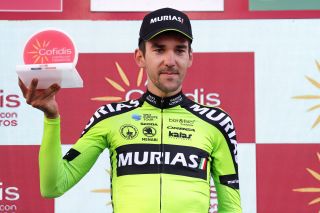 Rumours that Basque Pro Continental team Euskadi Basque Country-Murias are in the 'last-chance saloon' and this could be the team’s final season are unfounded, insists team director Jon Odriozola.

"I think we can announce good news in the next 15 to 20 days," Odriozola told Cyclingnews at the start of stage 11 at the Vuelta a España, where the team subsequently took a dramatic solo stage win with Mikel Iturria.

Alarm bells had begun to sound earlier this week after Spanish media reported that Euskadi-Murias had given its riders the right to look for other teams for 2020.

But Odriozola says Euskadi-Murias, one of four Pro Continental teams present in this year's Vuelta a España, is not throwing in the towel just yet. Even if he recognises not having a sponsor for 2020 that he can publicly announce yet is "extremely exasperating."

"The problem is that it's all running really late. The team's achieved a lot and waiting for so long is exasperating everybody," he said. "Not just for us, but for all the people that support the team.

"It's a pity that we're in this situation after so much hard work and so many good results and that we have to be waiting until almost the last minute to announce something."

Good news about sponsors may be around the corner in the mid-term, but in the short-term things could hardly have gone better for Odriozola's team when Euskadi-Murias claimed their second stage win in two years in the Vuelta a España on Wednesday.

Mikel Iturria's solo victory came just 24 hours before the Vuelta is due to reach Bilbao, too, close to where Euskadi-Murias has their headquarters in the Basque Country – considered Spain's main cycling heartland and one of the main backers of the team, too.

Iturria powered away 25 kilometres from the line after forming part of the break of the day. Although his advantage dropped to as little as six seconds by the finish, he battled on regardless to claim his debut victory as a pro and a timely win for the team.

"Before the race, the team management had asked which stage I thought would suit me, and I said 'this one'," Iturria told reporters afterwards.

"But I was thinking about getting in the break. Winning's another thing altogether; way better."

Even so, Iturria had opted to check out the stage 11 route before the Vuelta.

"I was in the area awhile and I thought I might as well take a look at the last 80 kilometres," the 27-year-old said. "It helped a lot."

What helped even more was that after Iturria had been dropped on a second-category climb of Ispeguy two thirds of the way through the stage – roughly where his pre-race recon began – when the Basque finally regained contact with the main break with 25 kilometres to go, in a smart display of tactics, having feigned weakness, he instantly tore off the front alone.

"I'm a diesel kind of rider, so the changes of pace don't suit me at all, but when I got back on, Odriozola had told me to kind of act dead, come in last in the line of the break, and then go flat out for it straight away and try to get a gap.

"When I heard the gap had gone up to more than 20 seconds, I thought, 'OK, I've placed my bet now, it's all or nothing.'

"I told myself never to look back, and I didn't until two kilometres to go, and when I did I could see that they were getting closer and closer.

"I reckoned they'd get me at 100 metres to the line. I was running on fumes, but I thought, 'If they're stronger than me, and I'm feeling even weaker by then than I am now, I might as well keep going and hope for the best'."

A 'huge triumph' for Basque team

For Iturria, whose career was almost over when he broke his femur in 2017 in the Tour of Limousin, taking his first pro win in a Grand Tour represented a massive breakthrough. In the team car for Odriozola, with the victory on a knife-edge for so many kilometres, "It was heart attack material," the Basque director later told Spanish TV.

"It's a huge triumph for us, and my thanks to all the people who've supported us all the way through."

The squad began life as a Continental team in 2015, becoming Euskadi Basque Country-Murias the following year.

Highpoints since then for the squad have come when Oscar Rodriguez fended off Rafal Majka (Bora-Hansgrohe) to win on La Camperona in the Vuelta a España in 2018, and when Edu Prades won the Tour of Turkey. This year they have had nine wins, one more than 2018 so far, with a lone victory in the Tour de Limousin and two stages in the Tour of Portugal followed up by their biggest of the season on Wednesday so far, thanks to Iturria.

As for a future sponsor, Odriozola told Cyclingnews before the stage that he expected to announce good news with 15 to 20 days.

"The most recent conversations are on the right track," he said. "We're being cautious because we know this situation affects a lot of people, not just the riders, but the staff, and that's why we're not saying anything until everything is signed and sealed."

Odriozola was less clear when asked if there was any ongoing basis in reality in the rumours that spread this spring that Euskadi-Murias and the Continental Equipo Foundation team – the latter run by former Euskaltel-Euskadi manager Miguel Madariaga and set to turn Pro-Continental – could fuse.

"I'm working to ensure this project has a future. We're a Pro Continental team and we're racing the Vuelta a España for the second year running," Odriozola said.

"There are people who think that the more unity there is, the better. But right now, it seems like we can keep going with companies that can support us. They can see what we're already doing a great job."

In terms of how Euskadi-Murias is performing in the Vuelta – and speaking before Iturria had taken his win – Odriozola said, "We've stepped up a level."

"For example, you could see that when we had two riders in a break dominated by WorldTour riders in Andorra, and Oscar [Rodriguez] was close to the top names, too. It shows that we have grown as a squad," he said.

"Performances like that are very motivating for everybody. But above all, we like it when people identify with our team – we may be small, but we've got a big heart."

As for arriving in Bilbao in the Basque Country today [stage 12] is going to be a highpoint for the team.

"It's going to be tremendous. We're expecting a great reception. Opportunities like this don't come that often, so we have to make the most of them," Odriozola said.

And when it came to his stage 11 victory, Euskadi-Murias rider Iturria could say exactly the same thing, too.