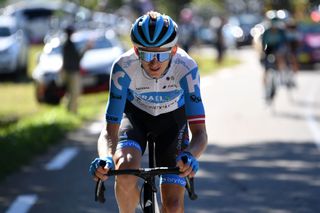 Israel Start-Up Nation are racing in their first Tour de France and have been aggressive in trying to get a result in the four stages so far. On stage 4, Krists Neilands and Nils Politt made the breakaway but the move never gained enough time for any of the riders to fight for the stage victory. Neilands was the last man standing but was caught by the Deceuninck-Quickstep and Jumbo-Visma-led peloton at the base of the final climb to Orcières-Merlette.

Neilands said he was disappointed but his team celebrated their first trip to the stage podium after the Latvian was awarded the combativity prize.

"I went for the breakaway immediately - kilometre zero," Neilands said. "We planned this because we thought this was the chance to steal a win in the escape. It looked great when Nils Polit joined me too, and the plan was to help me get the freshest to the end attack."

Unlucky for the team was the presence of Alexis Vuillermoz (AG2R La Mondiale) - a minor threat to race leader Julian Alaphilippe (Deceuninck-Quickstep) at 3:53 in the overall standings - which limited the leeway the Belgian team would give to the breakaway.

"The problem was that we had a rider in the escape at the top of the general ranking and so the peloton didn't really allow us to open a big gap," Neilands said. "I was badly disappointed with the situation but towards the last climb, I said to myself: 'I didn't come here to play. I'm going for an attack even if it's lost. I didn't spend my strength all day to give up'.

"So I attacked and gave it all. The aggressive rider podium with which I finished the day - it's wonderful for the team, and for hours the world saw 'Israel' on the screens - it's a big thing but I won't settle for it. I am determined to achieve a victory in this race."

After Trek-Segafredo led the teams classification since the first stage, on Tuesday it was EF Pro Cycling's turn to take the honours of wearing the yellow helmets of the best team in the Tour de France.

Rigoberto Urán led the team as the sole rider to finish at the back of the leading group behind stage winner Primoz Roglic (Jumbo-Visma) in 15th, while teammates Daniel Martínez and Sergio Higuita lost 28 seconds in the rapid push to the top of the climb.

"The results of the final climb was due to a combination of how the climb was in terms of the gradient but also the pace set by Jumbo- Visma was at a really high speed, so that didn't really favour our climbers," EF Pro Cycling's director Charly Wegelius said. "Rigo showed his experience and held on really well at the end and the rest of the team really stepped up to place those guys well for the final. To take the lead in the team general classification was a nice reward for a good day's work. We look forward to the coming stages and the guys are getting better and better every day."

Lopez boxed in during sprint for stage 4

Miguel Angel Lopez (Astana) had a strong finish atop Orcières-Merlette in sixth place but the Colombian climber hoped for more. Just before Roglic kicked off his winning attack, Lopez could be seen getting out of the saddle to accelerate along the right before the road turned and he was pinched along the barriers.

"Today I felt quite good and my legs worked perfectly. I like this kind of climbs as it suits me quite well. The team did a very good job for me during the whole day and in the final, I was up there among the main favourites. Unfortunately, I was boxed in twice during the last two kilometres, but with my sixth place today I can be satisfied," Lopez said.

"It was just the first real test in the mountains, and I am happy that my form is growing on and my condition is improving day by day. It is still the first week of the race and all the fight is still ahead, so I will continue going through the race day by day."

Frenchman Guillaume Martin is the dark horse contender for the Tour de France and showed his promise with a blistering attack on the final climb of stage 4 to Orcières-Merlette. The Cofidis rider couldn't quite withstand the might of Roglic but came in for a solid third place on the stage behind Tadej Pogacar (UAE Team Emirates).

"Guillaume has been performing great for several days now and he is keen to go on the attack," Cofidis manager Cedric Vasseur said. "We had to be patient, especially since this Tour de France is a race by elimination. What was important today is to reassure and Guillaume had the legs to do it. We saw him alongside the best riders in the world. If we look at his evolution these last weeks, we can only be optimistic for the next stages of the competition."

Martin's move might not have worked but just digging into the race was a boost for his morale.

"It sure didn't go far but I would have regretted not attacking in the 500 metres," Martin said. "I had to try most over my feelings were very good. After the lockdown, I passed a real turning point, I demonstrated it at the Critérium du Dauphiné and I can feel it again here. Being in the top on the first mountain stage of the Tour de France is very encouraging for the rest of the race."

France posted the largest monthly count of confirmed COVID-19 cases at the beginning of the coronavirus pandemic, and on Monday reported 3,082 new cases even as schools reopened across the country. The crowds at the Tour de France have been thin and on stage 4, absent from the final climb.

It's a trend that the ASO and the Velon teams business group wish to continue so that the race can continue to the finish in Paris on September 20.

Both groups posted videos with riders appealing to fans to keep their distance from riders and wear masks, as has become compulsory across the country, to keep the virus at bay.

We're so happy the #TDF2020 has started, but to keep it on the road we need your help. If you're at the race, please keep a safe distance and wear your masks to give us the best chance of making it to Paris 🇫🇷. Please RT and thanks in advance from all the teams and riders! 🚴‍♂️ pic.twitter.com/iLIezrj6AGSeptember 1, 2020