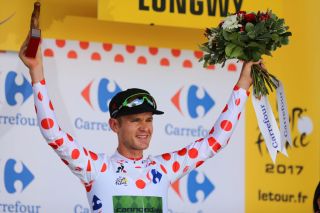 Nate Brown jumped from Axel Merckx’s Bontrager Development Team to the WorldTour in 2014 with Cannondale-Garmin, one of the many iterations of Jonathan Vaughters’ American Slipstream program, when he was just 22.

In six years with Slipstream, the rider from Tennessee played the role of consummate domestique and worker bee, helping his better-known teammates take wins around the globe. Now Brown will get his own chances with a move for 2020 to US Pro Continental outfit Rally UHC, where he is expected to slot into the road captain role left open when Canadain Svein Tuft retired at the end of the season.

Although he’s still just 28, Brown’s WorldTour and European experience make him a good candidate to help guide Rally’s younger riders as they learn the ropes abroad, even if he still feels a little under-aged for his new purpose.

“It’s still weird to me,” he told Cyclingnews on Thursday at the team’s get together this week in Minneapolis.

“Even during my last year in [EF Education First], they started putting me into this road captain role, and I was like, ‘I’m still a kid. Wait a minute.' But I had been there for six years. Except for [US road champion Alex] Howes, I was the longest guy on the team,” he said.

“So it’s been a shift. I’ve normally just been a helper, and I do my work and I don’t open my mouth and I just keep my nose to the grind. Now it’s more like people are asking me, ‘What should I do here?’”

Brown met up with his new teammates earlier this fall in what he referred to as Rally’s low key “bro camp,” an informal gathering where they rode mountain bikes and generally refamiliarised themselves with each other.

“I like that because I feel like you really get to know people there, and then when you go into the actual camps you already know everyone and it’s not like you're meeting everyone for the first time,” he said.

In fact, Brown has raced against most of his new teammates before and has shared a team with some of them, including Gavin Mannion on Bontrager and Ty Magner in the junior ranks.

“So a lot of these guys I’ve known forever, and it just feels natural just going right back into this,” he said.

Although Brown has been a worker during his WorldTour tenure with Slipstream, his desire to post up his arms in victory at the end of a race hasn’t diminished. He had few opportunities with his former team, and the promise of getting his own chances with Rally drew him to the program.

“On EF I had one opportunity where they gave me free rein to ride for myself. So I’m not used to that, and now coming to this team it’s more of a mixed role. They want me to mentor the younger guys and then they actually want me to race to win,” he said.

“I’m super excited, because at the end of the day we all got into cycling because we had that drive to win and we wanted to perform. I feel like I kind of lost that for awhile, so I’m excited to have that opportunity.”

One of the first challenges Brown will need to overcome is making the mental switch from helper to leader and finisher, meaning he’ll need to stay focused for the entire race, rather than just playing his role for others and then shutting things down as the pointy end of the race rides away to decide a winner.

“I think it will take me a bit to get used to, because now instead of doing your job and just being done, I get to actually keep switched on for the end of the races,” he said.

“Like I said, I haven’t done it, so I think it will be hard for me at first to realise, ‘No, I have to keep going. I can’t stop,’ especially if the team’s behind me, even if I’m not having a great day.

“Normally I’m like, ‘Alright, I’m done. I’ve done my job.’ But now it’s like no, if the team works for you, you can’t just get to the middle of the race and say, ‘No, I don’t feel good.’ It’s different, and I think it will take some getting used to, but once I get into the flow of it hopefully I’ll get a couple of good results and reignite that drive to win.”

Brown’s time with Vaughters’ teams was not completely without personal glory. In 2017 Brown rode his first and only Tour de France, and he capitalised on the opportunity by taking the polka dot climber’s jersey on stage 3 and keeping it for two days before Fabio Aru snagged it from him.

“I grew up watching the Tour de France like every teen in the US who got into cycling,” he said. “Just to do it was a dream come true, and then to stand on the podium -- even if it was just two days in the KOM jersey -- I was over the moon. Something I will always remember.”

Although Brown had the green light from his team to ride for himself, all of his teammates did as well, including one who was already in the KOM jersey. It made things a bit more complicated.

“The day before, Taylor Phinney was in the break and he took the jersey on stage 1,” Brown said. “So I got free rein to go for the break on stage 2. Phinney said he really wanted to keep the jersey, so he was our first option. But the break took a while to go, and I saw a move going. I decided to tag along and I got in it.

“I won the first KOM sprint, and then the second one I lost,” he said. “On the third one it came down to me and this one guy, and whoever won that one was going to take the jersey. I remember I was so nervous I attacked him like 1.5km from the line. They came over the radio and said, ‘Hey Nate, you have 45 seconds on him. You can ease up.’ And I was like, ‘Nope, I’m not easing up until I cross the line.’ Even then, after I had done that, I was so nervous that somehow I would lose it. But it worked out.”

The jersey also earned Brown a surprise visit at the end of the Tour.

“My family wasn’t there, but my dad came to Paris,” Brown said. “He’s a Delta pilot, and he somehow got a trip to Paris, so he flew the plane to Paris, got in a Taxi, came to the finish and watched the finish. So he was able to see me finish, and I gave him a polka dot jersey. That was really cool.”

But the coolest thing about his Tour adventure is the motivation, inspiration, and confidence it gave him going forward after a difficult year in 2016 that he said left him feeling lost and wondering why he was still racing bikes.

“The year before I didn’t race from May on, because basically I had just dug myself into this grave in the spring, and my body just shut down and I didn’t race for the rest of the year,” he said.

“So going into 2017 I was super motivated, and my one goal was to make the Tour de France team. And then I made it, and that just proved to myself that I can do this, and you can do anything if you really put your mind to it. So ever since then, it’s really motivated me, that if you put your mind to a goal you can achieve it.”

Rallying for another season

Brown is hoping to take that motivation and the lessons he learned in 2017 into the upcoming 2020 season with his new team and the new opportunities he'll get.

“I have goals and I’m really going to put my mind to it, like, ‘Hey, I really want to target this time frame,' and I feel like I haven’t had that. On a WorldTour team when you’re a smaller fish, you’re basically doing what the team tells you to do.

“I had to be ready for any race at any time, which isn’t a bad thing, but now I can get one time frame when I want to be really good, and it’s a goal, and I feel like now that I have that I’m going to be able to really focus on something, and it’s going to be good.”

Brown will get his first chances with Rally early next year in Argentina at the Vuelta a San Juan and the Tour Colombia 2.1, where he has raced the previous two seasons.

“Next year is in Bogota, so it’s even higher,” he said of the Colombian race, adding that the fans there rival he crowds at the Tour de France.

“I would even say -- especially in Medellin -- that it was bigger than a lot of the Tour de France crowds, and the fans are so passionate.”