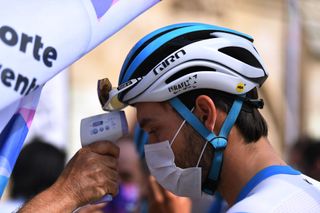 Movistar sports director Pablo Lastras has flatly denied that his team suggested to Israel Start-Up Nation that they quit the Vuelta a Burgos after pulling two of their initial starters as a COVID-19 precaution.

The two Israel Start-Up Nation riders in question, Alex Dowsett and Itamar Einhorn, had had contact with a third teammate, Omer Goldstein, who returned a positive test for COVID-19 earlier this week. The two subsequently tested negative.

Lastras, meanwhile, has firmly denied a report in the Belgian press on Wednesday that stated Movistar had suggested to Israel Start-Up Nation that their entire team quit as a precaution.

“I roundly, categorically deny it,” Lastras said on Wednesday evening. “Neither Movistar nor any other team have made any kind of comment to that effect. It’s a false rumour.”

Lastras pointed out that one of Movistar’s other sports directors – Txente García Acosta – forms part of the race committee handling prevention and strategy for COVID-19. He also suggested that the extensive amount of backroom work that teams carry out “in order to race safely” should be given more coverage in the media.

“We are all subject to the norms of each government, not just nationally, but in the countries where we are going to compete as well,” he pointed out.

Lastras also looked ahead to Thursday’s critical summit finish stage at Picón Blanco, observing that on such an exposed climb, the wind “would be a key factor. If it’s a headwind or a crosswind, things will change notably.”

“If you’re not in good shape, then you need to lose as little time as possible so you can bounce back on Saturday at the Lagunas de Neila. It’s going to be an interesting day.”