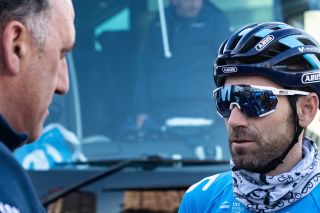 Alejandro Valverde will start his 2020 season at the four-race Mallorca Challenge held from January 30 to February 2. Movistar Team will begin preparations for the season kick-off at a team training camp held at the Rafa Nadal Academy on January 26.

Valverde traditionally starts his season at the Mallorca Challenge and has twice won Trofeo Serra de Tramuntana (2013 and 2015).

He will have support from a team that includes Enric Mas, Marc Soler, Héctor Carretero, Dario Cataldo, Imanol Erviti, Antonio Pedrero, José Joaquín Rojas, Davide Villella and Albert Torres. Lluís Mas will join the team upon the completion of the Tour Down Under.

The team will get together at Rafa Nadal Academy by Movistar this weekend for a three-day camp ahead of the races.

At the camp, the riders will fine-tune training and technical needs, cover several meetings with their sponsors and hold an early-season press conference. The press conference will include manager Eusebio Unzué and riders Valvlerde, Soler and Enric Mas, to be held on January 28 at the Rafa Nadal Sports Centre.

Movistar Team have a squad currently racing at the Tour Down Under and they will field a team at the Vuelta a San Juan in Argentina, which starts on January 26.

In December, Valverde announced that the 2020 Tokyo Olympic Games would be the centrepiece of his season. He will also participate in the Tour de France, but is unlikely to finish the three-week race because it ends just six days before the elite men's road race in Tokyo.