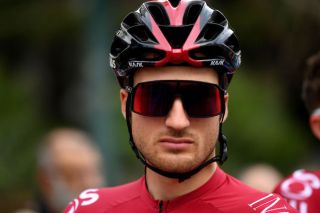 Gianni Moscon will not ride any Grand Tours in 2020 and will instead focus on the cobbled Classics, which have been rescheduled for October due to the COVID-19 coronavirus pandemic. The Team Ineos rider has not raced since he was disqualified from Kuurne-Brussel-Kuurne in March for throwing his bike at Jens Debusschere following a crash.

Speaking to Spazio Ciclismo, Moscon confirmed that he would not be part of the Ineos squad for the rescheduled Tour de France, fixed for August 29-September 20, and he said that he would forgo the Giro d’Italia (October 3-25) in order to ride the cobbled Classics.

“My big objectives are the October Classics, which are on at the same time as the corsa rosa,” Moscon told Spazio Ciclismo. “The Tour will finish right before what will, for me, be the key moment of the season. Team Ineos will start the Grande Boucle to win it, and whoever is part of the team can’t think about saving his legs.”

Moscon was expelled from the 2018 Tour for aiming a punch at Élie Gesbert but he was part of the Ineos team that helped Egan Bernal to overall victory in 2019.

The WorldTour season is due to resume on August 1 with Strade Bianche, while both Milan-San Remo and Il Lombardia are also due to take place in August, with their dates expected to be finalised later this week following a meeting of the UCI Professional Cycling Council.

Moscon looks likely to resume his season at Strade Bianche, with Spazio Ciclismo suggesting the Italian might later line out at Tirreno-Adriatico (September 7-14). He will train at altitude in the Dolomites before returning to competition. “I’ve done that often in recent years and managed to work well,” he said.

Ineos directeur sportif Gabriel Rasch described Moscon’s behaviour at Kuurne-Brussel-Kuurne as “not acceptable” and said that his disqualification was justified. It was the latest in a long line of indiscretions from Moscon, who was suspended by his team for six weeks – albeit during a period when he had few races scheduled – after he racially abused Kévin Reza at the 2017 Tour de Romandie.

Later that year, Moscon was accused of deliberately causing Reza’s teammate Sebastien Reichenbach to crash at Tre Valli Varesine. Reichenbach, who had highlighted Moscon’s racial abuse of Reza, sustained a fractured elbow and hip in the crash, but the UCI ultimately dropped the case due to a lack of video evidence.

Moscon was disqualified following the 2017 World Championships road race in Bergen for taking a tow from the Italian team car. In 2018, he was expelled from the Tour de France and suspended for six weeks after aiming a punch at Élie Gesbert.