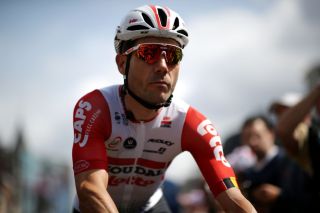 Fair game or unnecessary? The dark arts of blocking the road

Lotto Soudal veteran Maxime Monfort has announced that he will retire from the professional peloton at the end of the 2019 season. The 36-year-old, who has been a pro since 2004, announced his decision via Twitter.

Monfort is currently in his sixth season at the Belgian squad, having previously spent time at Cofidis, Columbia-HTC, and Leopard-Trek after starting out at Landouwkrediet.

He has five career victories to his name, including the 2009 Belgian time trial championship, the 2004 Tour of Luxembourg, and the 2010 Bayern Rundfahrt, as well as time trial victories at both those stage races.

Monfort said that his choice was a difficult one, but has come to the conclusion that it's the right time to call an end to his career.

"It's not without emotion that I announce the end of my career as a professional cyclist," he wrote. "It was a difficult decision. I lived a very intense 2019 season with great moments in my role as a teammate, especially at the Tour de France.

"I choose to finish on a beautiful note. I could have spent another year in the peloton, but I am convinced that the time has come to stop."

Monfort, who recently saw his sixth place at the 2011 Vuelta a España upgraded to fifth after Juan José Cobo's disqualification, rode the last of 20 Grand Tours of his career in July.

At the Tour he finished 142nd in Paris and was part of a successful campaign for Lotto Soudal, with the team taking four stage victories courtesy of Caleb Ewan and Thomas De Gendt.

The Belgian's final race will come next month at the Famenne Ardenne Classic, which takes place near his hometown of Nadrin in Wallonia.

"I'm in active discussions for new professional projects," Monfort said. "I will tell you more soon, but my desire is to continue to invest myself in the world of cycling. Before that, I want to finish my season in the best possible way.

"My very last race will be the Famenne Ardenne Classic in Marche-en-Famenne on Sunday October 6. This is a race that takes place in my dear province of Luxembourg, close to my hometown of Nadrin. [It's] very symbolic."