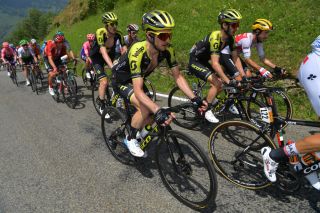 Mitchelton-Scott’s strategy for 2020 could see the Australian WorldTour team place all three of their established GC contenders, Adam and Simon Yates and Esteban Chaves, in the Giro d’Italia and Tour de France, while leaving the Vuelta a España for their up-and-coming stage race challengers.

Mitchelton-Scott have traditionally split their three leaders across the three Grand Tours. In 2019 Simon Yates rode the Giro and Tour, Adam Yates focused solely on the Tour, and Esteban Chaves combined the Giro and Vuelta.

However head sports director Matt White has told Cyclingnews that the most likely option for 2020 is for the Yates brothers and Chaves to concentrate on the Giro and Tour – although which rider goes where has yet to be revealed. They would, in the process, all miss out on the Vuelta, which Simon Yates won in 2018 - Mitchelton-Scott’s only Grand Tour victory to date.

Asked which of his three main men the 2020 Vuelta route suited, White said: “Look, you could see a fourth or a fifth one when we get to September. Jack Haig or Lucas Hamilton? You never know.

“The way we’ve mapped out our Grand Tours, we might have a new leader at the end of the year for that race [the Vuelta]. It might not be one of our three leaders. They might not even be here.”

A final decision, White says, will be made public “fairly soon.”

As for the Vuelta route itself, White suggested the third week “is one of the easiest I’ve seen in a Grand Tour for quite a while.”

“It’s a strange course, because that last week has a time trial and then a mountain stage, albeit a very tough one,” he continued

“But the really difficult part of the race is once we get back to Spain after the first three stages in Holland. All the way through that first week and second week – it’s on.

“I think effectively the Vuelta will be decided by the Angliru, which bucks a trend in the Grand Tours. But I like the course, it’s got lots of short stages. Off the top of my head I didn’t see more than a single stage longer than 200 kilometres.

“These last few years there’ve been so many hilltop finishes in the Vuelta, and this time round, there’s something for everyone. “