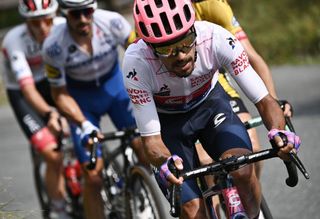 If there was a downside to winning one of the world’s biggest races, it could be the loss of anonymity, and the pressure that comes with everyone talking about you. Daniel Martínez, long considered a rising star can hardly be said to have come from nowhere, but his Critérium du Dauphiné victory has thrust him into the spotlight ahead of the Tour de France.

The Colombian, however, appears to accept the newfound burden of expectation lightly, and with a degree of maturity that belies his 24 years of age.

"I have decided to take whatever comes – the good and the bad. If things go wrong, I will take it and accept it. That’s my approach to the race," he said in an EF Pro Cycling pre-Tour press conference. "Every day is a new story, and anything is possible in this Tour de France."

Martínez was sitting alongside 2017 Tour runner-up Rigoberto Urán and fellow Colombian youngster Sergio Higuita, with the trio set to share leadership equally over the next three weeks.

"What’s keeping me calm is those two," Martínez added. "I know that they can do well and, in the case that I’m not feeling so good, then Rigo will do so and Sergio will do so.

"The team is doing very well and I’m feeling good. The Dauphiné was my first race back and I found I was much better than other riders who’d done other races previously, so that helped give me a confidence boost ahead of the Tour."

Martínez refused to be drawn on a specific objective in what is his fifth Grand Tour appearance but the first in which he has realistic prospects of forming part of the general classification battle. When asked whether, if not yellow, the white jersey could be an objective, he pointed out that 2019 champion Egan Bernal is still eligible for the young rider classification.

"Going for the white jersey would effectively be going for the overall victory," the EF Pro cycling rider said.

Martínez won the mountainous Dauphiné with a fine display that saw him finish with the favourites, as Jumbo-Visma and Ineos controlled the early stages before reaching out for the title on a chaotic final day once those teams’ leaders – Primoz Roglic and Egan Bernal – had abandoned.

Martínez predicted that Jumbo-Visma and Ineos Grenadiers would be the most influential teams in this year’s race and insisted that would in turn create opportunities for everyone else.

"The Jumbo-Ineos battle is going to be very good for us. The other teams are going to be able to take advantage of that war between them, and when they let their guard down, attack," he said.

"This year it’s a more open Tour de France, with riders who haven’t raced much, riders who are still waiting for the best form, and riders who have already had some results. There’s going to be a big mix of levels, and lots of surprises. I believe it will work in our favour, and that we can work well together and find some opportunities."