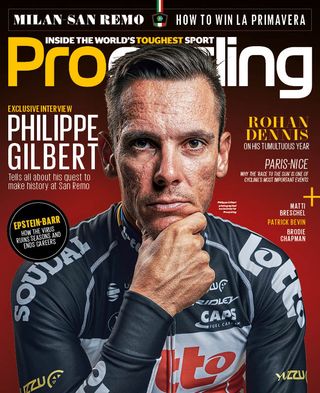 Milan-San Remo is looming into view on the horizon as the first monument of 2020, and one rider who is eagerly awaiting its arrival is Philippe Gilbert.

The Belgian goes into the race having won four out of the five monuments during his career, with only victory at La Classicissima missing from his palmarès. If Gilbert were to win Milan-San Remo, he'd become only the fourth rider in history to win all five races.

This season has also seen Gilbert rejoin Lotto Soudal where he spent three years earlier during his career. Procycling went to meet him at a team training camp to ask him about his quest for Milan-San Remo victory and his place in cycling history.

"Now, in modern cycling, what I've achieved is pretty crazy. Winning these different races; when you look at the parcours they are completely different," Gilbert said.

From January's Procycling: Alberto Contador and Chris Froome: Clash of the titans

But just what does it take to win Milan-San Remo? At just under 300km in length, it is the longest one-day race on the calendar and while it's classed as one of the more straightforward monuments to win - it's biggest challenges are the Cipressa and Poggio climbs - its complexity lies in the detail.

Procycling speaks to seven different winners - including three-time champion Óscar Freire and Fabian Cancellara - about how they conquered the race.

Another rider embarking on a season with a new team, like Gilbert, is Rohan Dennis. The time trial world champion joined Team Ineos this year after his acrimonious split from Bahrain-Merida midway through the Tour de France last summer. Sophie Smith was at the Tour Down Under - Dennis's first race with his new team - to see how he's settling in.

"[It's] just trying to get it through to him that we're the type of teammates, I like to think, that will go that extra mile, and just don't be afraid to ask for any help any time," the Australian's teammate Luke Rowe tells Procycling.

While the classics riders are readying themselves for Milan-San Remo, March also sees one of the longest established and prestigious early-season stage races on the calendar in Paris-Nice. Edward Pickering analyses why the 'Race to the Sun', which dates back to 1933, occupies such a unique place in cycling, as well as picking out some of the most memorable moments during the race's history.

In August last year, Matti Breschel raced for the final time, bringing to an end a career as a professional rider that spanned 15 years. Victor Lindholm spent time with Breschel last year, near his home in Denmark, as he prepared for a life in retirement and struggled to figure out his new identity away from cycling.

At the other end of the spectrum is a rider who is almost just starting out in the sport, Brodie Chapman. In just four years the Australian has gone from relative road racing novice to WorldTour rider with FDJ-Nouvelle, and opened her winning account for 2020 at Race Torquay in January. She tells Sophie Smith about entering cycling through mountain biking and downhill, growing up in the Australian rainforest and taking her progression step by step.

Another rider looking to step on this year is Patrick Bevin, the New Zealand time trial specialist who finished fourth in the Worlds TT in Yorkshire last year. Bevin tells Patrick Fletcher about the challenges he faced getting his break in Europe, why he's become an expert in aerodynamics and physics and why time trialling is anything but boring.

Meanwhile, Fran Reyes investigates the impact Epstein Barr can have on the career of professional cyclists. A number of riders have been diagnosed with the virus in recent years including Mark Cavendish, Esteban Chaves, Benat Intxausti and Thor Hushovd, and while there is no cure he finds out the devastating results it can have.

In Retro this month, William Fotheringham looks back at the career of Andrei Tchmil, one of the toughest riders in history and among 11 riders who have won Milan-San Remo, the Tour of Flanders and Paris-Roubaix.

The March issue also features all of our regulars, including the latest updates from Procycling's 2020 diarists: James Knox, Heidi Franz, Roger Kluge and Dan Martin, plus the thoughts of our new columnist Laurens Ten Dam.