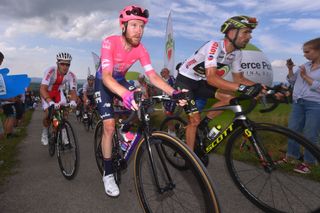 Logan Owen will return to his cyclo-cross roots this weekend in Arkansas, lining up at FayetteCross, a USA Cycling Pro CX event at the venue that will be used for the 2022 UCI Cyclo-cross World Championships.

The EF Education First rider hasn’t competed in a ‘cross race in three years, choosing instead to focus on his road career. But the 10-time national cyclo-cross champion through the junior and U23 ranks is itching to see what he can do against the top domestic field as the US national championships approach in December at a Pacific Northwest venue where he cut his teeth racing.

Owen's last 'cross race took place at the 2016 World Championships in the U23 division, where he finished 13th. Before that he as eighth at the Hoogerheide World Cup U23 race and third at the US Elite men's national championships, the only time he's raced the elite category there.

"I’m really excited and motivated to see how I can do. I think I’m a little bit fitter now than when I was actually racing ‘cross, so I’m interested to see how it goes,” Owen told Cyclingnews Thursday afternoon.

"I literally have ridden my ‘cross bike once. I just went out and tried to set everything up and make sure it was all set up properly as far as fit and everything. I just got the bike two weeks ago, but I was more focused on riding the road for now."

Owen is one of the US's most successful male cyclo-cross racers, putting together a string of 10 consecutive national championships through the junior and U23 ranks. He took his last U23 title in 2015 before competing in the elite category a year early in 2016.

"It’s been a while, that’s for sure," Owen said when Cyclingnews asked about his last race, the rider struggling a bit to remember.

Owen walked away from cyclo-cross in 2017 to focus on road racing and earning a spot on the WorldTour during his final year with Axel Meckx's Hagens Berman Axeon development team. It paid off with a contract at EF Education First, where he's signed through next season.

In the past two seasons on the road, he's ridden 53 days and 51 days, respectively, winding down his 2019 road campaign with his first Grand Tour start at the Vuelta a Espana in September.

Hometown nationals and then Worlds?

The draw for Owen to keep training after a long year of traveling and racing on the WorldTour with EF Education First are the USA Cycling Cyclo-cross National Championships at Fort Steilacoom in Lakewood, Washington, on December 12.

"That’s actually where I won my first UCI elite race, and I grew up racing on that course," Owen said. "They’ve changed it a little bit – there’s no Knapp run-up like we used to do – but I’m very familiar with that area. It will be a good course. They’ll do a good job."

The chance to race his first love again and do so on what he considers a home course was too much temptation to pass up, and now that Owen's team has jumped on board, the plan has been kicked up a notch. Owen planned on racing nationals from the back row because he'd have earned none of the UCI points that determine call-ups at the start, but then his team stepped in and scheduled the trip to Arkansas.

"I had kind of planned on coming to nationals anyway, whether or not it worked with the schedule, but now it’s really good because if I get some points in Arkansas then I don't have to start dead last at nationals, and then I actually have a chance at winning," he said.

"So that’s kind of the goal for this weekend; I'm just trying to get some points. Obviously, I’d like to win, but who knows if I’m any good anymore."

Owen did say his only ride on his new Cannondale 'cross bike went well.

"It was good when I went out on the trails. I was still able to rip just as hard as I was before," he said. "The position on the bike is a little bit different, so I wasn’t super comfortable, but I’m changing that up for the race. But I felt good.

"It will be different because I am riding Vittoria tires, and all I’ve ever known is Dugast or Challenge tires, which are all pretty much the same anyway. So I’m interested to see how the Vittoria’s feel. I heard it was going to rain maybe this weekend there, too, so that will be fun."

Owen's fellow 'cross competitors will also be keen to find out how the 24-year-old is riding after two years away on the road circuits, and they'll all have their answers soon enough. Owen, meanwhile, said he would consider a run at the 2022 Cyclo-cross World Championships in Fayetteville if everything works out.

"It would be nice to race it, but it’s a ways down the road," he said. "As of now I’m focused on my road career, but if my road career keeps going up there and trajecting that way, then yeah, but I want to make sure everything is set on the road before I make any kind of ‘cross decisions.

"But if time allows and the team is cool with it," he said, "I wouldn’t mind maybe giving it a go at Arkansas Worlds."

Throw back to my first Pro UCI CX win at Fort Steilacoom 🔥. Here’s to hoping that I remember how to run this weekend🤞🏼 pic.twitter.com/vy0mxs8THnOctober 4, 2019