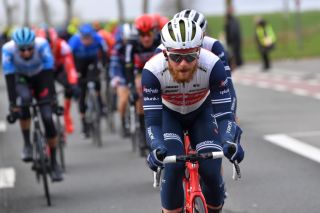 When an 18-year-old is thrown into the WorldTour, there are always going to be teething problems, no matter how physically and mentally mature they seem.

After a resounding victory in the junior world championship road race, which capped a remarkable season and a meteoric rise on the road, Quinn Simmons skipped the U23 ranks and dived straight into the WorldTour with Trek-Segafredo in 2020.

With racing having been suspended for nearly five months by the coronavirus pandemic, he has had plenty of time to take stock.

"I was just more stressed about everything – about doing every ride perfectly, every meal perfectly," he told Cyclingnews this week.

Quinn Simmons: It'd be cool to have Fall Classics after losing the Spring Classics

Simmons started out by supporting Matteo Moschetti to two sprint wins at Challenge Mallorca, followed by two top-10 placings of his own at the Tour de la Provence, which was "not quite what I was looking for". However, it was his introduction to the Classics – the races in which he has been tipped for future greatness – that left a sour taste.

He raced Omloop Het Nieuwsblad – won by teammate Jasper Stuyven – followed by Kuurne-Brussel-Kuurne and Le Samyn, but did not finish any of them.

"I came in a bit too heavy and paid the price. I got too obsessed with the idea that, as a Classics rider, I needed to be some big 80kg rider, and I kind of lost the ability to go uphill and still sprint at the end of it, which is what I’m good at," he said.

"When I woke up in the morning [of Omloop], I could tell I was a bit off, but you lie to yourself and get out there, so I just did what I could do help the team."

Simmons will have a second chance to put those teething problems away when his neo-pro campaign resumes at the Tour de Pologne in two weeks’ time. Having circumvented the US-Europe travel ban via the Spanish embassy, Simmons will travel from his home in Durango, Colorado, to Europe on Saturday, five months since making the opposite journey when the coronavirus pandemic took hold.

That said, Simmons feels he has "used the time well", partly since all that time has been spent at nearly 2000 metres altitude. There have been some intense training blocks, but the time has largely been spent reconnecting with his old, pre-pro life.

"I didn’t even unpack my bike for two weeks. I just went skiing every day, which was good to mentally relax. I actually went a whole month without touching my road bike. Trek sent me a mountain bike so I was mostly riding that and doing gravel stuff and long endurance rides."

Simmons did a first block of proper road training in April, and spent the whole of June on a training camp in Park City, Utah – also at altitude – with some friends from his junior days. "We decided with the team not to go to the team camps because it’s less stress and I can do good work over here," he said.

Still, he has kept reaching for the wider tyres and less structured form of riding, from an alternative 'Dirty Kanzelled' gravel ride to a week-long bikepacking trip across southern Colorado with his father.

"I was out having fun on the bike like I used to. Road racing is a lot of fun but when I’m just riding, I prefer to do it off-road."

That said, it’s not like there’s no training benefit to it. "We were doing six or seven-hour days," he said of the self-styled ‘Rona Escape Tour. "When you do that with stuff on your bike, that makes you pretty strong."

The will to win

As such, as he prepares to board that flight to Europe, Simmons feels both physically and mentally prepared for the challenges ahead. After Poland, he'll do Dwars door het Hageland and the Tour of Hungary. He was due to fly back to North America for the Québec and Montréal GPs but those races have now been cancelled, so it’s likely he’ll stick to the Tour of Luxembourg and the BinckBank Tour ahead of the rescheduled 'spring' Classics in October.

"I’ll have an advantage in not having to worry about not knowing the level. It’s such a different game [to the juniors] but at least I have a better idea how that works," he said.

When it comes to the Classics, Simmons insisted his role will be defined by his performances in the preceding races, but, even in a team with Stuyven and the world champion, Mads Pedersen, didn’t hide his ambition.

“I don’t think I’d be a bike racer if I didn’t have the desire to win. I don’t see myself as a 19-year-old kid. I am a pro now, and I’m on this team in these races because I deserve to be.

"Of course, I want to learn from the other guys but if there’s a chance to go for the win and put myself in that position, I’m not at all hesitant about doing that.

"I’m here to race. I’m not going to be satisfied to be a rider who sits in the peloton. I need to be racing and trying to win. It’ll never be enough for me to be pack-fill and spend the whole year saying ‘I’m learning’."