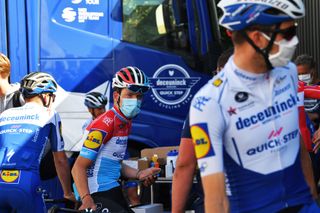 Deceuninck-QuickStep team manager Patrick Lefevere is concerned about an early return to road racing in July and the risks of COVID-19 coronavirus cases after seeing how a lack of social distancing and health procedures sparked a number of cases during Novak Djokovic's recent tennis tournament.

The men's WorldTour will return on August 1 with Strade Bianche but other minor races will be held sooner, with a kermesse backed by the Vermarc Sport clothing company planned for July 5. Vermarc Sport is the race clothing sponsor for Lefevere's team and riders from Deceuninck-QuickStep, Lotto Soudal and Alpecin-Fenix are among those expected to participate, though their precise line-ups have yet to be confirmed.

Last week Primoz Roglic won the Slovenian road race title in front of a significant crowd and with no indication that the UCI COVID-19 guidelines were followed.

Official tennis tournaments have been suspended but Djokovic and a number of other players and staff tested positive after two matches of the Adria Tour in Serbia and Croatia.

Professional racing to resume in Belgium with kermesse on July 5

With several clusters emerging in different European countries, Lefevere is concerned July maybe too soon for a return to cycling.

"My worst nightmare is that the races in July - like in tennis - lead to infections," he wrote in his weekly column in Het Nieuwsblad.

"I still want to believe that Novak Djokovic has organized his tournaments with good intentions, but without precaution it was going to end badly.

"Let it be a lesson for all cycling races that will start again in July. They (COVID-19 clusters) are now shooting up like mushrooms, but I hope that enough attention is paid to prevention."

Deceuninck-QuickStep recently held a small training camp in Belgium but Lefevere suggested his riders were vigilant.

"Our riders are also young people who haven't seen each other for a long time but in the evening after dinner everyone went straight to their rooms," he said.

"I have said it before: at races the attention to hygiene and the risk of contamination is a kind of second nature. In tennis - with the richest sponsors in the world - you may think that you are untouchable."

While some teams have formed different bubbles for training camps based on race programme and objectives, 50 Deceuninck-QuickStep riders and staff will gather in the Italian Dolomites between July 6-23 for an altitude training camp.

"By going on a collective camp, the entire team can remain in the same bubble. That seems to me to be the safest and certainly the most transparent approach," Lefevere suggested.

"Other teams may differentiate between different programs, we prefer to keep everyone together for the time being. We will also be testing regularly in the coming weeks."