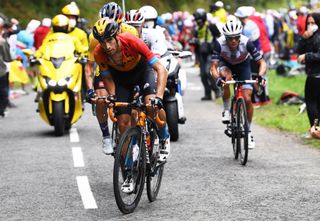 Two days after it seemed he was heading out the general classification door at the Tour de France, Bahrain McLaren leader Mikel Landa revived his chances of a strong outcome in Paris thanks to a double dose of impressive racing in the Pyrenees.

Landa had been so upset by his failure to stay in contention when the echelons formed on Friday's stage 7 to Lavaur, following a crash involving himself and several teammates, that he refused to talk to journalists afterwards. But the weekend has been a different story.

First of all, on Saturday the Spaniard rode solidly to finish with all the other big contenders, and even if his joint counter-attack behind Tadej Pogačar (UAE Team Emirates) with Richie Porte (Trek-Segafredo) failed to work out, he still regained seven GC spots to move up to 12th overall.

But on Sunday he shone far brighter as he sheared off the front with Primož Roglič (Jumbo-Visma), Pogačar and Egan Bernal (Ineos Grenadiers) on the steep slopes of the Col de Marie Blanque. Fifth place in Laruns saw him miss out on time bonuses, but he was still in a good enough position to break back into the top 10 overall.

Standing 1:42 down on Roglič, Landa was effusive at the finish, recognising that he had "felt very good all day," adding "we've gained some important time here."

"I had a very bad night [after losing time in the echelons]. That 1:21 I lost has really mattered because on the four big mountain stages, I've done well," Landa said. "The Tour does not forgive any mistakes you make but I'm very happy with how this week has ended.

"I fell on the first day of racing, too, and I lost time in the echelons, but I'm doing fine now. Why shouldn't I think about trying to get on the podium? There are lots of strong racers here, but I'm going to try it."

Landa was his characteristically direct self when asked what he thought of his rivals' performances.

"We talked a lot about whether Bernal was strong or not, and the answer is yes, he is. He's second overall and Ineos always appear in the right place at the right time," Landa said.

"Roglič and Pogačar are very strong as well. Pogačar has a really explosive way of attacking on the climbs, it's very hard to get on his wheel, so let's see if that really explosive style of his starts petering out in the days to come. Meanwhile, maybe I can start trying to form alliances."